Which Countries Trust Their Government, and Which Ones Don't? – Visual Capitalist 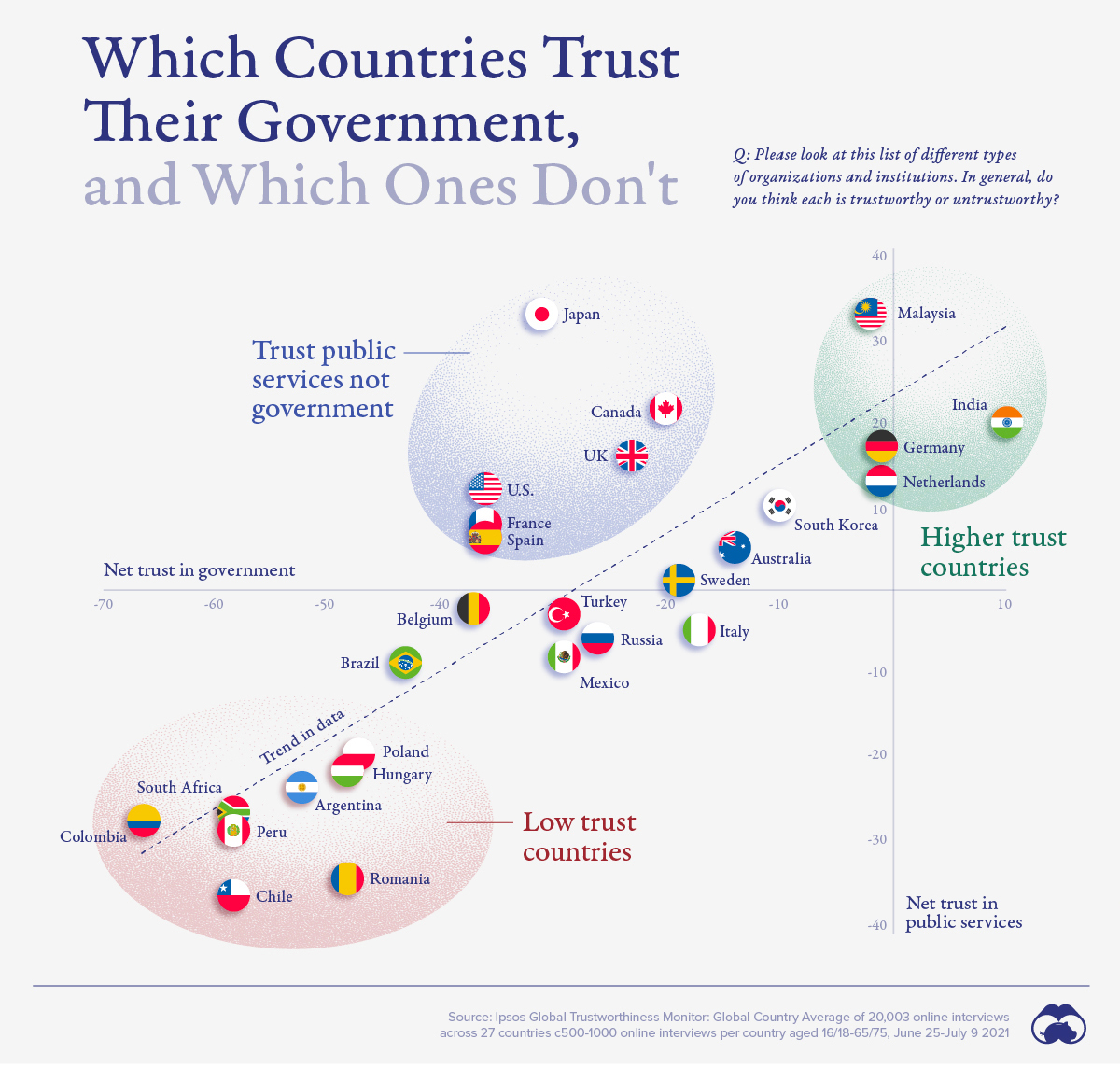 In many countries around the world, vast portions of the population do not trust their own government.
Lack of faith in government and politics is nothing new, but in times of uncertainty, that lack of trust can coalesce into movements that challenge the authority of ruling parties and even threaten the stability of nations.
This visualization uses data from the Ipsos Global Trustworthiness Monitor to look at how much various populations trust their government and public institutions.
Since the beginning of the pandemic, global trust in government has improved by eight percentage points, but that is only a small improvement on an otherwise low score.
At the country level, feelings towards government can vary widely. India, Germany, Netherlands, and Malaysia had the highest government trust levels.
Many of the countries with the lowest levels of trust were located in Latin America. This makes sense, as trust in politicians in this region is almost non-existent. For example, in Colombia, only 4% of the population consider politicians trustworthy. In Argentina, that figure falls to just 3%.
Broadly speaking, people trust their public services more than the governments in charge of managing and funding them. This makes sense as civil servants fare much better than politicians and government ministers in trustworthiness. As our main chart demonstrates, there is a correlation between faith in government and trust in public institutions. There are clear “high trust” and “low trust” groupings in the countries included in the polling, but there is also a third group that stands out—the countries that have high trust in public institutions, but not in their government. Leading this group is Japan, which has a stark difference in trust between public services and politicians. There are many factors that explain this difference, such as values, corruption levels, and the reliability of public services in various countries.
While trust scores for government improved slightly during the pandemic, trust in public institutions stayed nearly the same.
Explainer: What to Know About Monkeypox
The U.S. has produced nearly 170 million firearms over the past three decades. Here are the numbers behind America’s gun manufacturing sector.
Published
on
By
While gun sales have been brisk in recent years, the uncertainty surrounding COVID-19 was a boon for the gun industry.
From 2010-2019, an average of 13 million guns were sold legally in the U.S. each year. In 2020 and 2021, annual gun sales sharply increased to 20 million.
While the U.S. does import millions of weapons each year, a large amount of firearms sold in the country were produced domestically. Let’s dig into the data behind the multi-billion dollar gun manufacturing industry in America.
According to a recent report from the Bureau of Alcohol, Tobacco, Firearms and Explosives (ATF), the U.S. has produced nearly 170 million firearms over the past three decades, with production increasing sharply in recent years.

America’s gunmakers produce a wide variety of firearms, but they’re generally grouped into five categories; pistols, rifles, shotguns, revolvers, and everything else.
Below is a breakdown of firearms manufactured in the country over the past 30 years, by type:
Pistols (36%) and rifles (35%) are the dominant categories, and over time, the former has become the most commonly produced firearm type.
In 2001, pistols accounted for 21% of firearms produced. Today, nearly half of all firearms produced are pistols.
There are a wide variety of firearm manufacturing companies in the U.S., but production is dominated by a few key players.
Here are the top 10 gunmakers in America, which collectively make up 70% of production:
One-third of production comes from two publicly-traded parent companies: Smith & Wesson (NASDAQ: SWBI), and Sturm, Ruger & Co. (NYSE: RGR)
Some of these players are especially dominant within certain types of firearms. For example:
*In 2020, Remington filed for Chapter 11 bankruptcy protection, and its assets were divided and sold to various buyers. The Remington brand name is now owned by Vista Outdoor (NYSE: VSTO)
Companies that manufacture guns hold a Type 07 license from the ATF. As of 2020, there are more than 16,000 Type 07 licensees across the United States.
Below is a state-level look at where the country’s licensees are located:
These manufacturers are located all around the country, so these numbers are somewhat reflective of population. Unsurprisingly, large states like Texas and Florida have the most licensees.
Sorting by the number of licensees per 100,000 people offers a different point of view. By this measure, Wyoming, Montana, and Idaho come out on top.
If recent sales and production trends are any indication, these numbers may only continue to grow.
This infographic covers the various types of weapons that are restricted or prohibited in war, according to international humanitarian laws.
Published
on
By
For thousands of years, there have been rules to control the types of weapons in warfare—for instance, the use of poison in armed combat was forbidden in Ancient Greece.
But it wasn’t until the 19th century that international agreements were made to legally regulate the types of weapons that are allowed (and banned) in wars around the world.
This graphic outlines the weapons that are banned or limited in war, according to international humanitarian laws that are outlined in the United Nations Convention on Certain Conventional Weapons (CCW).
The CCW, also known as the Inhumane Weapons Convention, is an international agreement that restricts the use of weapons that have been deemed unnecessarily cruel and inhumane.
Currently, there are 125 State Parties involved in the agreement, with signatures from an additional four states. In the CCW, there are five protocols outlined that restrict or limit the use of the following weapons:
It’s worth flagging that, under the CCW, the use of cluster bombs is not outright banned. However, their use and production is prohibited under separate legislation called the Convention on Cluster Munitions (CCM).
At this time, the CCW does not have enforcement processes in place, or systems to resolve any breaches of the agreement.
Another international treaty that aims to limit the use of unnecessarily dangerous weapons is the Chemical Weapons Convention (CWC), which prohibits the creation, acquisition, stockpiling, and use of chemical weapons by State Parties. 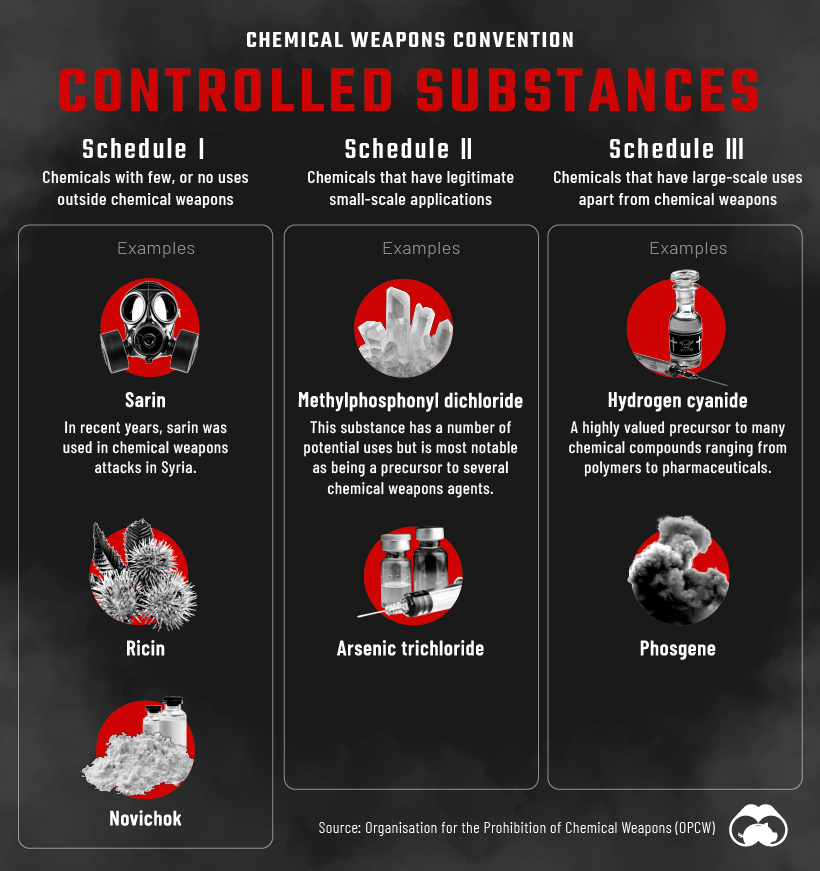 193 State Parties have signed the CWC, and one more state (Israel) has technically signed the agreement but hasn’t yet made it official.
Syria signed the agreement back in 2013, but according to reports from UN human rights investigators, the Syrian government has used chemical weapons on numerous occasions throughout its ongoing civil war.
In the current conflict between Russia and Ukraine, it’s been reported that Russia’s been using several weapons that are banned by international legislation, including cluster bombs and explosive weapons. Harvard Law expert Bonnie Docherty explains why these weapons are so dangerous:
According to reports from Human Rights Watch, Russia has been using cluster bombs in several areas of Ukraine, such as the heavily populated city of Mykolaiv, and in Solyani, a suburban area just outside of Mykolaiv.
Over the last few decades, certain protocols and restrictions in the CCW have been amended and changed based on societal changes and technological improvements.
So, as military weapons continue to improve, and technology like commercial drones become more common, proper legislation around drone use in warfare may be necessary.
Currently, there is no international legislation that bans the use of drones in war. However, several global defense companies are popping up to try and find ways to counter these new military technologies. In fact, the global addressable market for counter drones and tracking systems is estimated at $10 billion worldwide.
The Top 10 Largest Nuclear Explosions, Visualized
Mapped: Solar and Wind Power by Country
Mapped: The State of Global Democracy in 2022
Made in America: Goods Exports by State
Visualizing U.S. Crude Oil and Petroleum Product Imports in 2021
Synthetic Biology: The $3.6 Trillion Science Changing Life as We Know It
Visualizing China’s $18 Trillion Economy in One Chart
Why Investors Tuned Out Netflix
Copyright © 2022 Visual Capitalist