What Does It Take To Be Wealthy in America? – Visual Capitalist 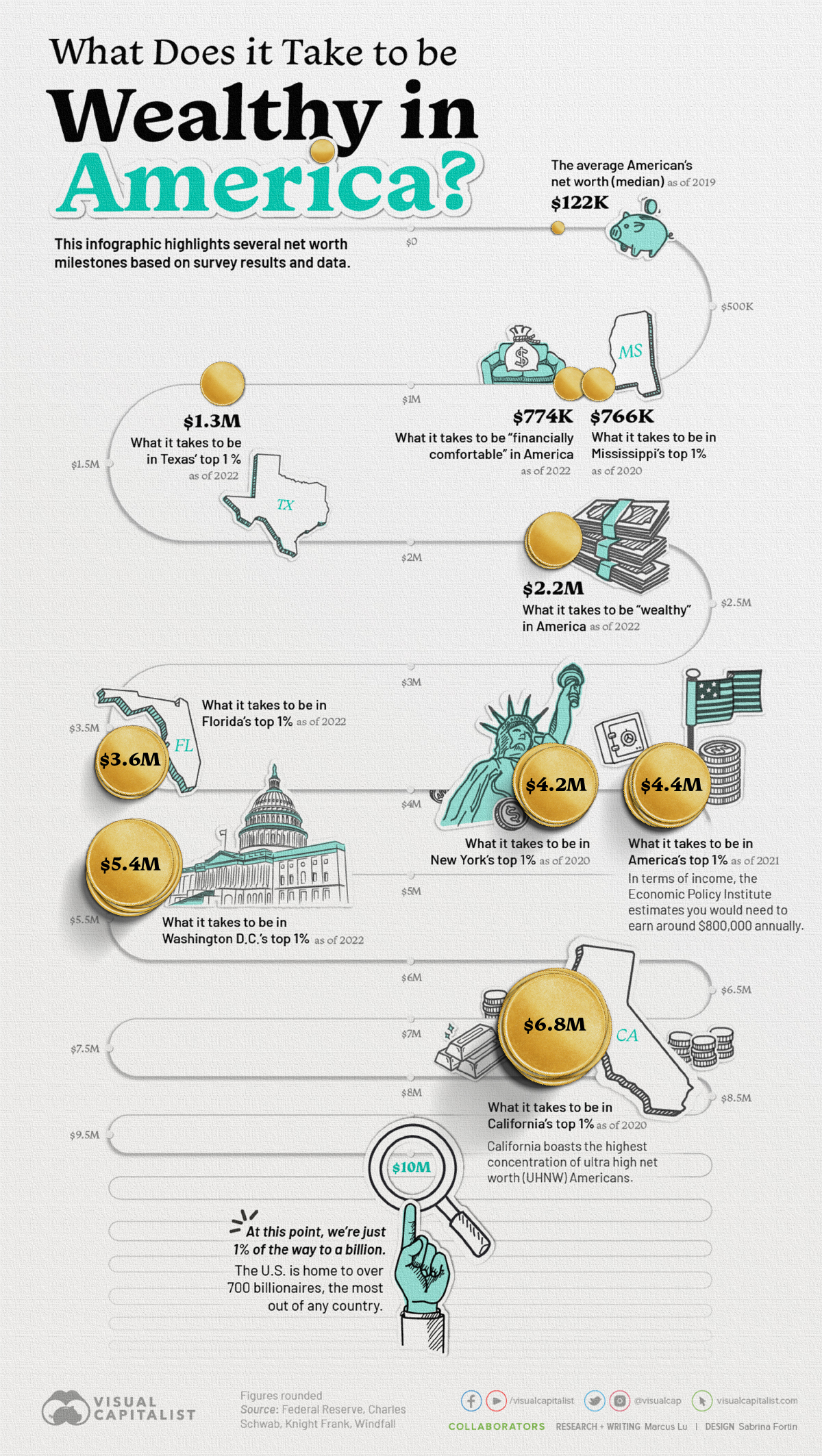 The goalposts of wealth are always shifting due to inflation and other factors.
For example, someone with a net worth of $1 million several decades ago would have been considered very wealthy. According to recent survey results, however, $1 million is only enough to feel “financially comfortable” today.
In this infographic, we’ve visualized several money milestones to give you a better idea of what it really takes to be wealthy in America.
This table lists the data used in the above infographic.
It covers data on what it takes to get into the top one percent for wealth in key states, along with broader survey results about what net worth thresholds must be crossed in order to be considered “comfortable financially” or even “wealthy”.
According to Charles Schwab’s Modern Wealth Survey, a net worth of $774,000 is needed to feel “financially comfortable”, while $2.2 million is needed to be considered “wealthy”.
Both of these milestones are far greater than the average (median) American’s wealth, which according to the Federal Reserve, was $122,000 in 2019.
Research by Knight Frank determined that in order to be a member of America’s one percent, one would need a net worth of $4.4 million. This is very high compared to other developed countries such as Japan ($1.5 million), the UK ($1.8 million), and Australia ($2.8 million).
The difference is partly due to America’s large population of ultra high net worth individuals, which includes the country’s 724 billionaires. See below for a list of the top five countries by number of billionaires.
Source: World Population Review (As of 2021)
Focusing again on the U.S., we can also see large discrepancies at the individual state level. Entry into California’s one percent requires a net worth of $6.8 million, which is 62% higher than the national average.
California is famously home to many of the world’s richest people, including Google co-founder Larry Page, and Facebook founder Mark Zuckerberg.
Being a one percenter in Mississippi, on the other hand, requires $766,000. That’s 83% lower than the national average, and just a tad lower than the amount needed to be “financially comfortable” by the average American. This is partially due to Mississippi’s poverty rate of 19.6%, which according to the U.S. Census Bureau, is the highest in the country.
Sorry to interrupt your reading, but we have a favor to ask. At Visual Capitalist we believe in a world where data can be understood by everyone. That’s why we want to build the VC App – the first app of its kind combining verifiable and transparent data with beautiful, memorable visuals. All available for free.
As a small, independent media company we don’t have the expertise in-house or the funds to build an app like this. So we’re asking our community to help us raise funds on Kickstarter.
If you believe in data-driven storytelling, join the movement and back us on Kickstarter!
Thank you.
Household Income Distribution in the U.S. Visualized as 100 Homes
Visualizing Net Worth by Age in America
The Richest Person on Each Continent
The Richest Person in Every U.S. State in 2017
The Relationship Between Income and Wealth
The Wealth Inequality Problem in One Chart
Only 22.7% of U.S. students are required to take a personal finance course. Which states have the highest levels of personal finance education?
Published
on
By
When you graduated from high school, did you know how to create a budget? Did you have an understanding of what stocks and bonds were? Did you know how to do your own taxes?
For many Americans, the answer to these questions is probably a “no”. Only 22.7% of U.S. high school students are guaranteed to receive a personal finance education. While this is up from 16.4% in 2018, this still represents a small fraction of students.
This graphic uses data from Next Gen Personal Finance (NGPF) to show the percentage of high school students required to take a personal finance course by state.
A standalone personal finance course was defined as a course that was at least one semester, which is equivalent to 60 consecutive instructional hours. Here’s the percentage of students in each state who have a required (not optional) personal finance course.
Eight states currently have state-wide requirements for a personal finance course: Alabama, Mississippi, Missouri, Iowa, North Carolina, Tennessee, Utah, and Virginia. Naturally, the level of personal finance education is highest in these states.
Five states have begun the process of implementing a requirement, with Florida being the most populous state yet to guarantee personal finance education for high schoolers. The state previously required schools to offer a personal finance course as an elective, but only 5% of students took the course.
Outside of the guarantee states, only 9.3% of students are required to take a personal finance course. That number drops to 5% for schools that have a high percentage of Black or Brown students, while students eligible for a free or reduced lunch program (i.e. lower income students) also hover at the 5% number.
The majority of Americans believe parents are responsible for teaching their children about personal finance. However, nearly a third of parents say they never talk to their children about finances. Personal finance education at school is one way to help fill that gap.
People who have received a financial education tend to have a higher level of financial literacy. In turn, this can lead to people being less likely to face financial difficulties. People with low levels of financial literacy were five times more likely to be unable to cover one month of living expenses, when compared to people with high financial literacy. Separate research has found that implementing a state mandate for personal finance education led to improved credit scores and reduced delinquency rates.
Not only that, financial education can play a key role in building wealth. One survey found that only one-third of millionaires averaged a six-figure income over the course of their career. Instead of relying on high salaries, the success of most millionaires came from employing basic personal finance principles: investing early and consistently, avoiding credit card debt, and spending carefully using tools like budgets and coupons.
Once the in-progress state requirements have been fully implemented, more than a third of U.S. high school students will have guaranteed access to a personal finance course. Momentum is expanding beyond guarantee states, too. There are 48 personal finance bills pending in 18 states according to NGPF’s financial education bill tracker.
Importantly, 88% of surveyed adults support personal finance education mandates—and most wish they had also been required to take a personal finance course themselves.
When we ask the next generation of graduates if they understand how to build a budget, it’s more likely that they will confidently say “yes”.
Which countries are best equipped to support their elderly citizens? This graphic compares pension plans around the world.
Published
on
By
Each year, millions of people around the world leave the workforce to retire.
But as the global population grows older, and the COVID-19 pandemic accelerates the already rising number of retirees, there is still a large degree of variance in the quality of public pension plans around the world.
Which countries have invested in robust public pension programs, and which lag behind?
This graphic, using 2021 data from Mercer CFA Institute Global Pension Index, compares retirement income systems worldwide.
Because a country’s pension system is unique to its particular economic and historical context, it’s difficult to draw direct comparisons. However, there are certain elements that pension experts see as universally positive, and that lead to better financial support for older citizens.
As with previous rankings, Mercer and the CFA Institute organized these universal elements into three sub-indexes:
These three measures were used to rank the pension system of 43 different countries, representing more than 65% of the world’s population. This year’s iteration of the index notably includes four new countries—Iceland, Taiwan, UAE, and Uruguay.
When it comes to the best pension plans across the globe, Iceland, the Netherlands, and Denmark have the top three systems.
Iceland’s system ranks high across all three sub-indexes. The country offers a state pension with two components: mandatory contributions from both employees and employers, and optional contributions to state-approved pension products.
Its system has a high contribution rate, which ultimately results in a generous state pension that retirees in Iceland can tap into. The country also has a relatively low gender pension gap, meaning the difference between the average female pension versus male pension is relatively small—especially compared to other OECD countries. On the opposite end of the spectrum, the Philippines, Argentina, and Thailand scored the lowest on the ranking.
Thailand scores particularly low in the adequacy category, with a score of 35.2. To increase its score, Thailand could increase the minimum payments for its poorest demographic and include more employees in occupational pension schemes.
According to the index, countries seem to be steadily improving their pension systems. From 2020 to 2021, the average score of the overall index increased by 1.0.
With an average of 60.7, the index shows that most countries’ systems have some good features, but they also have some significant shortcomings that could be addressed by the following recommendations:
Countries that implement even a few of these changes could make a huge difference for their next generation of retirees—and those that don’t could be in trouble in the near future.
Mapping the Migration of the World’s Millionaires
Who’s Still Buying Fossil Fuels From Russia?
Visualizing the Coming Shift in Global Economic Power (2006-2036p)
Ranked: These Are 10 of the World’s Least Affordable Housing Markets
Mapped: A Decade of Population Growth and Decline in U.S. Counties
Visualizing Well-Known Airlines by Fleet Composition
Iconic Infographic Map Compares the World’s Mountains and Rivers
Interest Rate Hikes vs. Inflation Rate, by Country
Copyright © 2022 Visual Capitalist