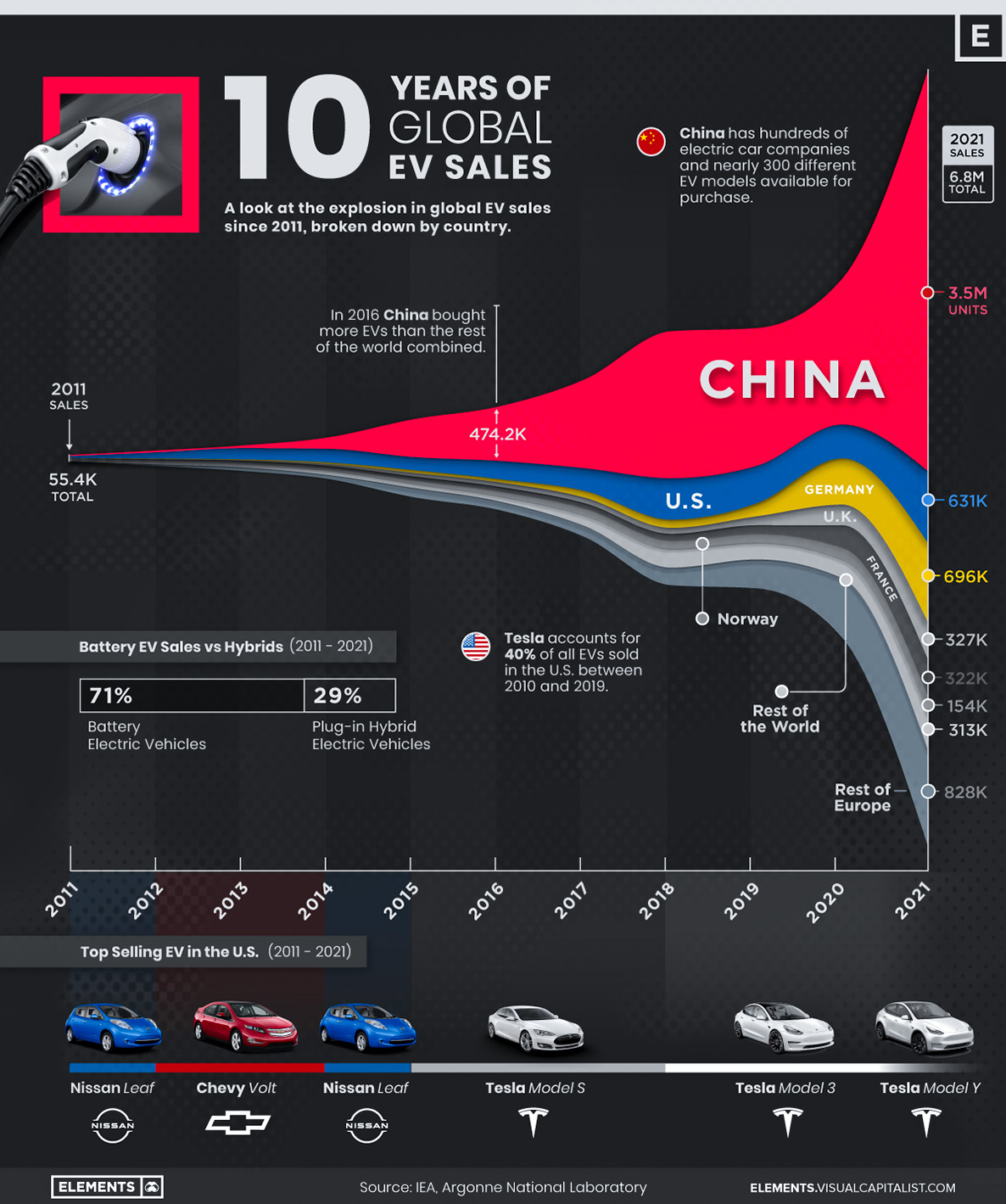 Hydrogen fuel cells have drawn criticism from notable figures in the industry, including Tesla CEO Elon Musk and Volkswagen CEO Herbert Diess.
Green hydrogen is needed for steel, chemical, aero… and should not end up in cars. Far too expensive, inefficient, slow and difficult to rollout and transport.
– Herbert Diess, CEO, Volkswagen Group
Toyota and Hyundai are on the opposing side, as both companies continue to invest in fuel cell development. The difference between them, however, is that Hyundai (and sister brand Kia) has still released several BEVs.
This is a surprising blunder for Toyota, which pioneered hybrid vehicles like the Prius. It’s reasonable to think that after this success, BEVs would be a natural next step. As Wired reports, Toyota placed all of its chips on hydrogen development, ignoring the fact that most of the industry was moving a different way. Realizing its mistake, and needing to buy time, the company has resorted to lobbying against the adoption of EVs.
Confronted with a losing hand, Toyota is doing what most large corporations do when they find themselves playing the wrong game—it’s fighting to change the game.
– Wired
Toyota is expected to release its first BEV, the bZ4X crossover, for the 2023 model year—over a decade since Tesla launched the Model S.
Several challenges are standing in the way of widespread FCEV adoption.
One is performance, though the difference is minor. In terms of maximum range, the best FCEV (Toyota Mirai) was EPA-rated for 402 miles, while the best BEV (Lucid Air) received 505 miles.
Two greater issues are 1) hydrogen’s efficiency problem, and 2) a very limited number of refueling stations. According to the U.S. Department of Energy, there are just 48 hydrogen stations across the entire country. 47 are located in California, and 1 is located in Hawaii.
On the contrary, BEVs have 49,210 charging stations nationwide, and can also be charged at home. This number is sure to grow, as the Biden administration has allocated $5 billion for states to expand their charging networks.
Electric vehicles can have 6 times more minerals than a combustion vehicle and be on average 340 kg heavier.
Published
on
By
Electric vehicles (EVs) require a wider range of minerals for their motors and batteries compared to conventional cars.
In fact, an EV can have up to six times more minerals than a combustion vehicle, making them on average 340 kg (750 lbs) heavier.
This infographic, based on data from the International Energy Agency (IEA), compares the minerals used in a typical electric car with a conventional gas car.
Editor’s note: Steel and aluminum are not shown in analysis. Mineral values are for the entire vehicle including batteries and motors.
Sales of electric cars are booming and the rising demand for minerals used in EVs is already posing a challenge for the mining industry to keep up. That’s because, unlike gas cars that run on internal combustion engines, EVs rely on huge, mineral-intensive batteries to power the car.
For example, the average 60 kilowatt-hour (kWh) battery pack—the same size that’s used in a Chevy Bolt—alone contains roughly 185 kilograms of minerals, or about 10 times as much as in a typical car battery (18 kg).
Lithium, nickel, cobalt, manganese, and graphite are all crucial to battery performance, longevity, and energy density. Furthermore, EVs can contain more than a mile of copper wiring inside the stator to convert electric energy into mechanical energy.
Out of the eight minerals in our list, five are not used in conventional cars: graphite, nickel, cobalt, lithium, and rare earths.
Minerals listed for the electric car are based on the IEA’s analysis using a 75 kWh battery pack with a NMC 622 cathode and graphite-based anode.
Since graphite is the primary anode material for EV batteries, it’s also the largest component by weight. Although materials like nickel, manganese, cobalt, and lithium are smaller components individually, together they make up the cathode, which plays a critical role in determining EV performance.
Although the engine in conventional cars is heavier compared to EVs, it requires fewer minerals. Engine components are usually made up of iron alloys, such as structural steels, stainless steels, iron base sintered metals, as well as cast iron or aluminum alloyed parts.
EV motors, however, often rely on permanent magnets made of rare earths and can contain up to a mile of copper wiring that converts electric energy into mechanical energy.
The growth of the EV market is not only beginning to have a noticeable impact on the automobile industry but the metals market as well.
EVs and battery storage have already displaced consumer electronics to become the largest consumer of lithium and are set to take over from the stainless steel industry as the largest end-user of nickel by 2040.
In 2021 H2, 84,600 tonnes of nickel were deployed onto roads globally in the batteries of all newly sold passenger EVs combined, 59% more than in 2020 H2. Moreover, another 107,200 tonnes of lithium carbonate equivalent (LCE) were deployed globally in new EV batteries, an 88% increase year-on-year.
With rising government support and consumers embracing electric vehicles, securing the supply of the materials necessary for the EV revolution will remain a top priority.
December 2, 2021 -Northern Graphite to Acquire Two Graphite Mines from Imerys Group
Read More
Visualizing China’s Dominance in Rare Earth Metals
Ranked: The Top 10 EV Battery Manufacturers
All the World’s Metals and Minerals in One Visualization
What is a Commodity Super Cycle?
How the World’s Top Gold Mining Stocks Performed in 2020
All the Metals We Mined in One Visualization
Visualizing the Life Cycle of a Mineral Discovery
The World’s Top 10 Gold Mining Companies
Copyright © 2021 Visual Capitalist
Please share your location to continue.
Check our help guide for more info.