Our website uses cookies to improve your user experience. If you continue browsing, we assume that you consent to our use of cookies. More information can be found in our Cookies Policy and Privacy Policy .
A new Delayed Gratification book presents 200 infographics which hopes to explain the world – from working out the best Bond to the international cost of cocaine.
Can a single book provide the answer for everything? That’s what the latest project from the team at slow journalism magazine Delayed Gratification sets out to do. Over 200 infographics, An Answer for Everything takes on questions from UFOs to mass veganism. As a Venn diagram on the opening page sets out, the book exists at the intersection of questions, data and design.

The team (Rob Orchard, Marcus Webb and the magazine’s art director Christian Tate) had been planning the book for some time, and lockdown provided a perfect time to work on it. Some of the graphics are updated versions from the magazines, while others are new. “With infographics, you have the chance to tell so many different stories,” Tate says. “A massive story with loads of information for people to delve into but there’s also a superficial element – you’re telling the last line of a story instantly on the page.” 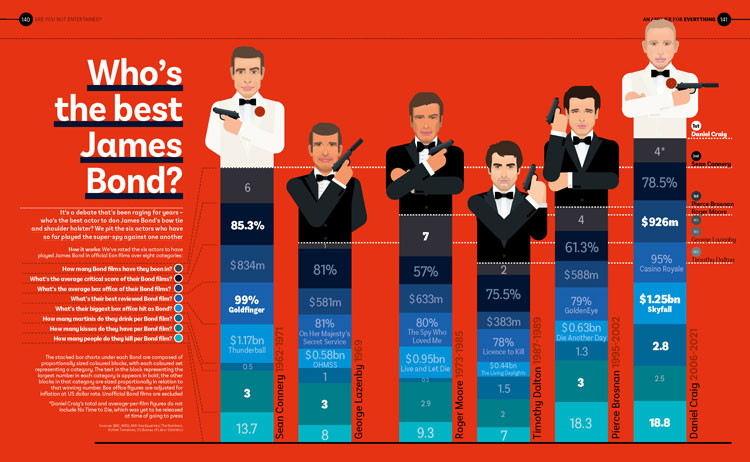 One spread in the new book asks: What are the 100 best books? It was a topic the team had wanted to cover for a while, though it had been hard as data differs by country and publishers. Instead, they took a critical approach – taking rankings from 30 best books lists from the UK and America. There’s a heavy 20th century dominance, and the list stops at Ian McEwan’s Atonement which was published in 2001. According to the data, F. Scott Fitzgerald’s The Great Gatsby is the best book of all time.

One key task is working out which information to leave in and what to take out, according to Tate. The first part of any graphic is stripping through a dataset and working out what the “little stories” are. “In that way, it becomes more than just a graph or a chart, it becomes more human.” For the books spread, Tate explains that the team thought readers would both want to be able to tick off which books they’ve read and also plan which other titles they could get through. The design team added traffic light-coloured spikes. The longer the spike, the more jury lists the book has appeared on, while word counts are charted from green (shortest) to red (longest). The lenghtiest title, Marcel Proust’s In Search of Lost Time, clocks in at over 1m words. 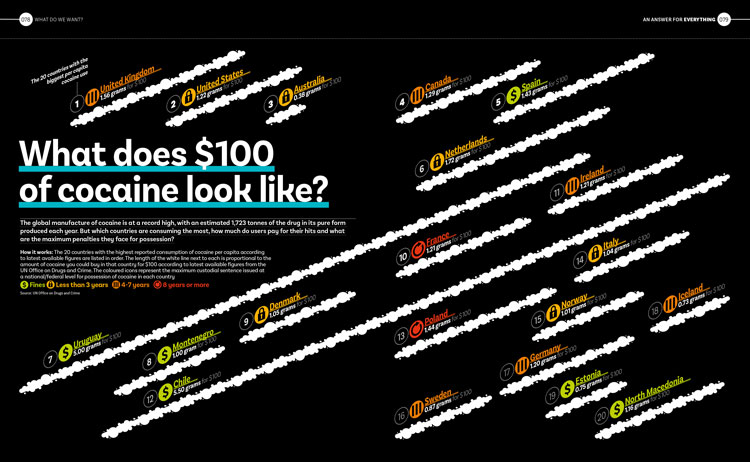 As Tate notes, lay-outs are reused throughout the book, as are colour codes, which means that readers can build up a fluency with the graphics – important when the topics are as wide-ranging as the ones covered here. One major inspiration for the team is David McCandless’ 2012 book Information is Beautiful, which distils global issues into simple graphs. “We wanted this to be quite accessible,” Tate adds, pointing out that many of the topics appeal to children and adults alike. There’s also a ‘How it Works’ explainer on each of the infographics.

While the team has tried to keep everything as up to date as possible, some information was out of the team’s control – highlighted by a James Bond-themed spread, which ranks all six Bond actors according to data around box office, critical reviews and how many martinis they drink per film. Daniel Craig’s final film, the much-delayed No Time to Die, had not been released before they finished the book. 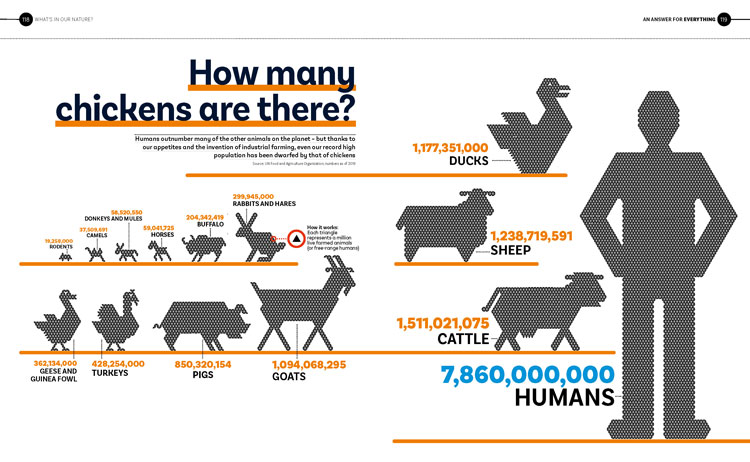 The book is purposefully playful. One four-page spread displays the number of humans on the planet compared to other animals. While the almost-8bn humans outnumber animals like camels (37m) and goats (1bn), all these are dwarfed by the number of chickens which, thanks to advent of industrial farming, number over 25bn. The chickens take up on their own two pages. Another striking and more adult-rated set of visuals compares the amount of cocaine $100 buys around the world. Uruguay’s powdered line takes up a worrying two pages.

Since Delayed Gratification’s first issue in 2011, infographics have boomed in popularity – now a regular feature on news publications, especially online where readers can toggle data filters. Tate, a self-proclaimed print enthusiast, says infographics “look much more beautiful in print”. They also function better in print, he believes. “It’s an interactive infographic where you show everything at once,” he adds. “There’s not much you can do beyond an animation in an online infographic that adds a massive amount, I don’t think.” 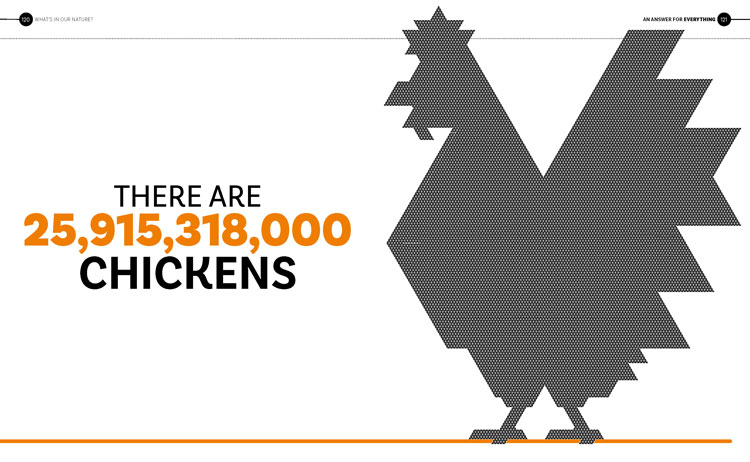 One exception might be the ability to input your own information to work out how you compare to the data available. The team has attempted something like this in the new book, with a spread on British billionaire Denise Coates. The infographic compares what someone with the average UK salary could buy in proportion to her earnings. That’s not always happy reading – “she’s got a private jet, you can afford a train ticket,” Tate says – but it’s an eye-opening explanation of how systems of pay work.

Another sobering theme throughout these infographics is the male dominance in awards recognition; one visualising the UK’s honours system highlights that more people called John (70) have been awarded the highest honour than women (53) during Queen Elizabeth II’s reign. Here, the team’s trademark tongue-in-cheek approach to graphics is clear. “Laying out that data reveals the absurdity, and is a story in itself,” Tate says. “To give it a frivolous approach just makes it even more ridiculous.” 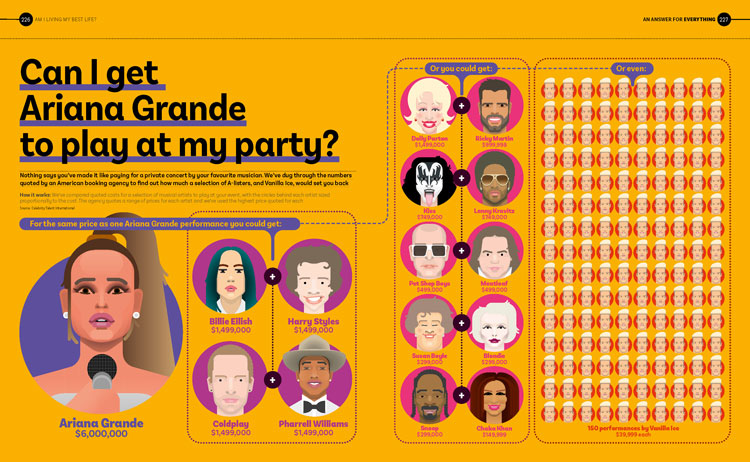 An Answer for Everything: 200 Infographics to Explain the World, from Delayed Gratification is published by Bloomsbury and available to buy now from bookstores.


For International Women’s Day 2022, we spoke to women in the design industry about their main challenges and opportunities in the workplace today.
New branding work for Preparation H resists “cold” medical terminology and leans into the humorous side of treatment.
The bike has been designed so that it has a low environmental impact, partly helped by its manufacturing process, which sees robots bend single steel sheets together to fabricate the
Leaders in design education are teaching a new generation how to think like sustainability innovators rather than designers.
Copyright © 2022 Centaur Media plc and / or its subsidiaries and licensors. All rights reserved.
built by interconnect/it
Xeim Limited, Registered in England and Wales with number 05243851
Registered office at Floor M, 10 York Road, London, SE1 7ND