The Cost of Space Flight Before and After SpaceX – Visual Capitalist 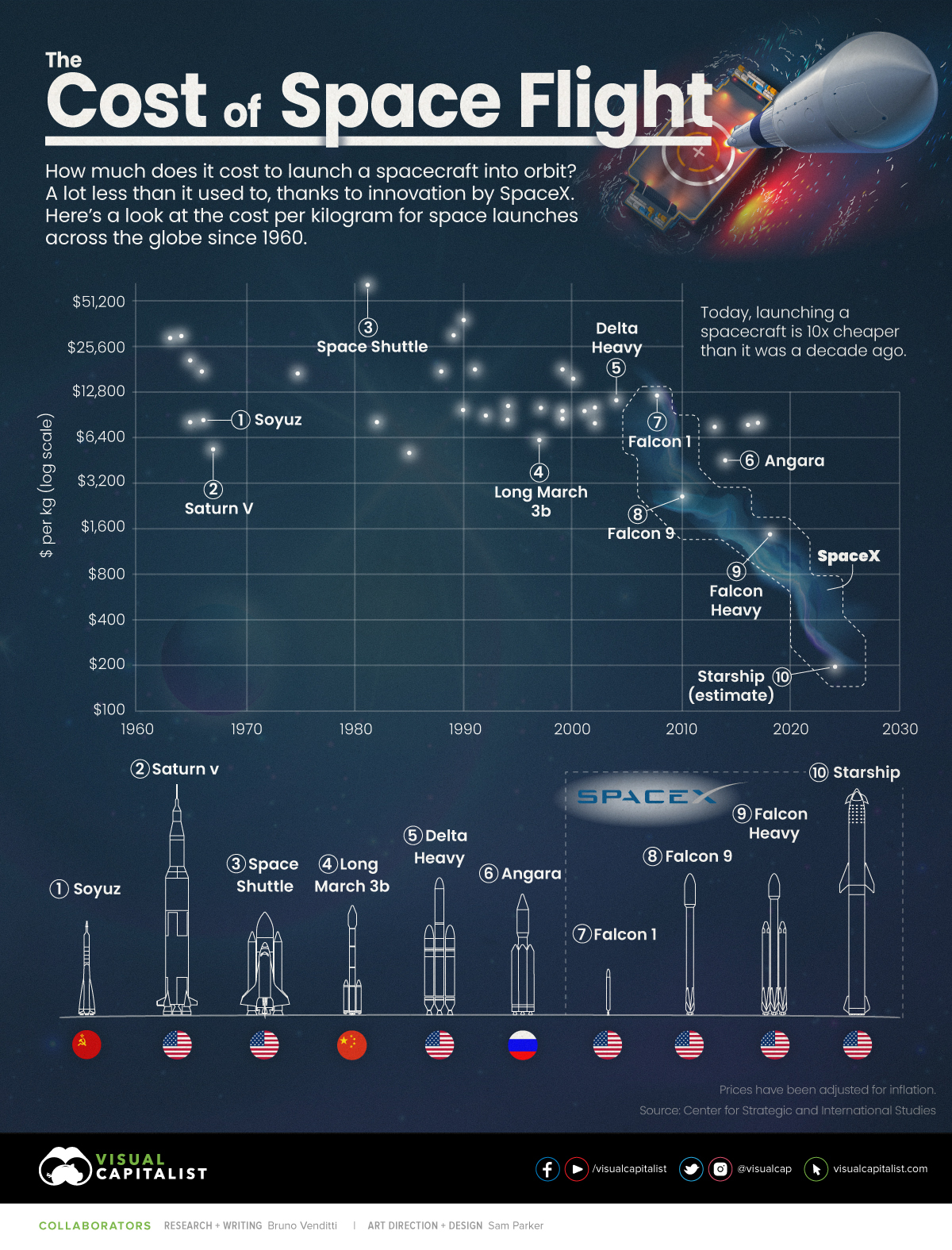 On December 21, 2021, SpaceX’s Falcon 9 rocket launched a cargo capsule to deliver supplies and Christmas gifts to astronauts in the International Space Station.
Just eight minutes after liftoff, the rocket’s first stage returned to Earth, landing on one of SpaceX’s drone ships in the Atlantic Ocean. This marked the company’s 100th successful landing.
Like other companies such as Jeff Bezos’ Blue Origin, and Ball Aerospace, SpaceX is designing and building innovative spacecraft that are speeding up space delivery by making it more routine and affordable. But how much does it cost to launch a cargo rocket into space, and how has this cost changed over the years?
In the graphic above we take a look at the cost per kilogram for space launches across the globe since 1960, based on data from the Center for Strategic and International Studies.
The 20th-century was marked by competition between two Cold War adversaries, the Soviet Union (USSR) and the United States, to achieve superior spaceflight capability.
The space race led to great technological advances, but these innovations came at a high cost. For instance, during the 1960s NASA spent $28 billion to land astronauts on the moon, a cost today equating to about $288 billion in inflation-adjusted dollars.
In the last two decades, space startup companies have demonstrated they can compete against heavyweight aerospace contractors as Boeing and Lockheed Martin. Today, a SpaceX rocket launching can be 97% cheaper than a Russian Soyuz ride cost in the ’60s. The key to increasing cost efficiency?
SpaceX rocket boosters usually return to Earth in good enough condition that they’re able to be refurbished, which saves money and helps the company undercut competitors’ prices.
Although competition has brought prices down for cargo flights, human space transportation is still pricey.
During the last 60 years, roughly 600 people have flown into space, and the vast majority of them have been government astronauts.
For a suborbital trip on Virgin Galactic’s SpaceShipTwo and Blue Origin’s New Shepard, seats typically cost $250,000 to $500,000. Flights beyond that to actual orbit—a much higher altitude—are far more expensive, fetching more than $50 million per seat.
In a SpaceX press briefing, SpaceX Director Benji Reed said, “We want to make life multi-planetary, and that means putting millions of people in space.”
This may still seem like a stretch for most people. But, given the decreasing cost of space flights over the last two decades, perhaps the sky won’t be the limit in the near future.
A Visual Introduction to the Dwarf Planets in our Solar System
The Companies that Defined 2021
A Deep Dive Into the World’s Oceans, Lakes, and Drill Holes
Mapped: Human Impact on the Earth’s Surface
A Visual Introduction to the Dwarf Planets in our Solar System
Space Sustainability: Preserving the Usability of Outer Space
Which Countries Have the Most Nuclear Weapons?
Light speed is often known as the speed limit of the universe. But in the vastness of space, even the speed of light seems slow.
Published
on
By
We often come across the term “light-year” in the context of space travel. But what does it actually mean?
A light-year is the distance light travels in one year. At a speed of 186,000 miles/sec (300,000km/sec), light travels 5.88 trillion miles (9.46 trillion km) in a year—a distance well beyond immediate comprehension.
Scientists created the term light-year to measure astronomical distances beyond the confines of the Earth. And in the vastness of space, light photons, which can go around the Earth 7.5 times in just one second, seem slow.
The above animation from planetary scientist Dr.James O’Donoghue helps put the speed of light into a broader perspective while highlighting the vast distances between celestial bodies.
The Moon is the nearest celestial body to Earth at 239,000 miles (384,400 km) away. A light photon emitted from Earth would get to the Moon in a mere 1.25 seconds.
But how does this compare to other celestial bodies in our solar system?
If you watched the entire length of the above video, you probably saw how “slow” light is. The same photon of light that reached the Moon in a little over a second took three long minutes to reach Mars, the next planet beyond Earth in our solar system.
It takes light just over eight minutes to get from the Sun to Earth. This means that when we look at the Sun, we see it as it was eight minutes ago, and if it were to disappear suddenly, we wouldn’t realize it for eight whole minutes.
Therefore, how “fast” or “slow” light is depends on your perspective. To us Earth-dwelling humans, it feels instantaneous. But the vastness of the universe makes even light seem slow—and it travels at a speed that our spacecraft aren’t even close to matching.
This map visualizes Earth’s seasons, showing how our planet’s Arctic sea ice and vegetation changes throughout the year.
Published
on
By
Why does Earth have seasons?
Many people think the seasons are dictated by Earth’s proximity to the Sun, but this isn’t the case. It’s the Earth’s tilt, not its closeness to the Sun, that influences our seasons.
This animated map by Eleanor Lutz visualizes Earth’s seasons, showing how the temperature changes impact ice levels in the Arctic as well as vegetation more broadly. It also highlights the cloud cover and sunlight each hemisphere receives throughout the year, with each frame in the animation representing a month of time.
Unlike some of the planets that sit completely upright and rotate perpendicularly, Earth rotates on a 23.5-degree axis.
But why? A commonly accepted theory among the scientific community is the giant impact hypothesis. According to this theory, a celestial object called Theia collided with Earth many years ago, when the planet was still forming. This collision not only knocked Earth into its tilted position—some believe that the dust and debris from this impact ended up forming our moon.
Ever since, our planet has been rotating with a slight tilt (which itself is not fixed, as it “wobbles” in cycles), giving us our varying seasons throughout the year.
As our planet orbits the Sun, it’s always leaning in the same direction. Because of its tilt, the different hemispheres receive varying amounts of sunlight at different times of the year.
In December, Earth is technically closer to the Sun than it is in June or July. However, because the Northern Hemisphere is tilted away from the Sun during December, that part of the planet experiences winter during that time.

The graphic above by the Smithsonian Science Education Center (SSEC) visualizes Earth’s orbit throughout the year, showing when each hemisphere receives the most direct sunlight (and thus, experiences summer).
While our seasons have always varied, it’s worth noting that climate change has impacted our seasons, and changed how much Arctic ice we lose each summer.
In the past, millions of miles of ice remained frozen throughout the summer months. In the 1980s, there were 3.8 million square miles of ice in July—that’s roughly the same size as Australia.
Over the years, Arctic ice cover has steadily declined. In July 2020, the ice cover was only 2.8 million square miles—a million less than the amount four decades ago.
Some scientists are predicting that we could lose our summer sea ice entirely by 2035, which would have a devastating impact on the Artic’s wildlife and the indigenous people who live there.
From Greek to Latin: Visualizing the Evolution of the Alphabet
Prediction Consensus: What the Experts See Coming in 2022
The 20 Internet Giants That Rule the Web
Companies Gone Public in 2021: Visualizing IPO Valuations
Ranked: Nuclear Power Production, by Country
Visualizing the Power of the World’s Supercomputers
Visualizing the State of Global Debt, by Country
The Periodic Table of Commodity Returns (2012-2021)
Copyright © 2021 Visual Capitalist