The best record cover artwork of 2021 has been revealed

Our website uses cookies to improve your user experience. If you continue browsing, we assume that you consent to our use of cookies. More information can be found in our Cookies Policy and Privacy Policy .
This year’s winning design marks the first time a record with interchangeable artwork has been chosen for the title.
The best record cover design of the last year has been announced as artist and designer Paul Phillips’ artwork for Villagers’ fifth studio album Fever Dreams.

Phillips’ artwork becomes the 17th winner of the Best Art Vinyl Award, and the first to have designed a record cover with interchangeable artwork.

Fever Dreams was chosen by public vote from a shortlist of 50, which itself was chosen by a panel of designers, artists and music industry experts. 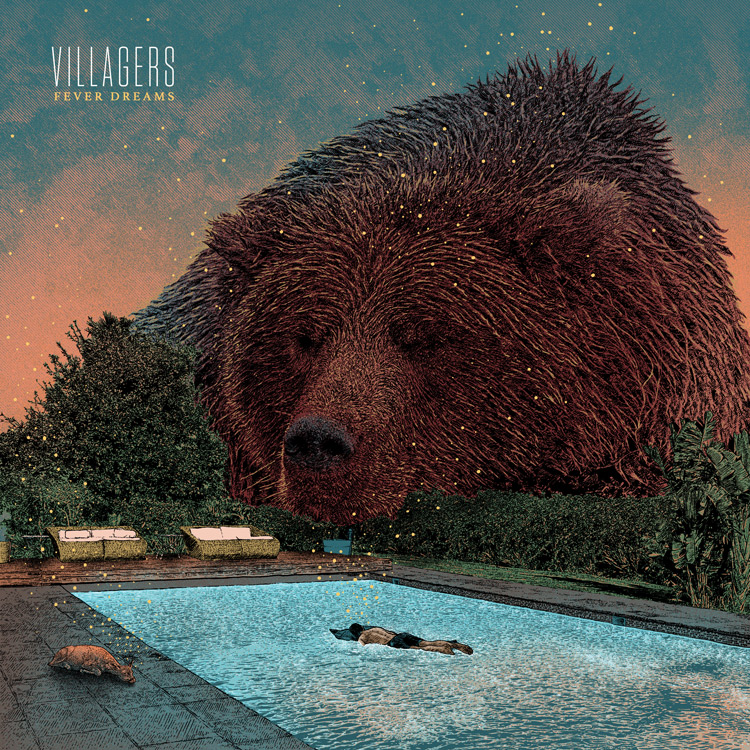 Phillips, who works in Brighton under the name True Spilt Milk Designs, developed the concept for the artwork by playing with scale – which is something he says he enjoys doing a lot in his creative work.

The main cover features an indeterminate figure floating on the surface of a pool, while a doe sleeps on the tiles along the edge. A bright constellation of stars floats over the scene.

He says the giant sleeping bear was “perfect for this concept” of being overwhelmed – especially given its large size in comparison to the other figures.

All three figures have been drawn asleep, and this was another conscious decision from Phillips. “I liked the idea of all three being asleep as if the image is a dream itself – [there is a] playful nature to this idea,” he says.

Alongside this primary cover, Phillips has also developed three supporting and interchangeable sleeves for the record. These covers also portray so-called fever dreams, this time belonging to an eagle, an elk and a snake.

“After having completed the initial artwork and sending it off to Conor [O’Brien – Villages’ singer/songwriter], he came back with a lovely enthusiastic email and wondered if I would do three more covers so we could make it a big project and have die-cut interchangeable sleeves,” Phillips explains, calling this extension “a dream job”.

O’Brien specified one of the covers should show an eagle, but left the other two animals up to Phillips. The eagle sleeve pictures a large-scale bird, carrying a tiny passenger while in flight.

Meanwhile the elk scene sees a peaceful giant animal, with a small human reclining against it; and the final cover features a large coiled in the middle of a sleepy street while a small person dozes atop it.

The pictures have been blended together and brightened for the cover, and show two ambiguously human figures – one in motion and the other standing still.

In third place was photographer Jason Joyce, who developed the artwork for hard rock band Thunder’s 13th studio album All The Right Noises.

The cover features an un-touched final capture of the Singing Ringing Tree Scultpture in Burnley. The image used on the cover was the result of a 24-hour photoshoot in freezing cold temperatures.

Heeps adds that the innovation of interchangeable record sleeves is appealing. “The originality of offering the LP owner both quality and quantity of art in one tidy package, just demonstrates how the humble vinyl record holds few barriers as to where this everlasting music format can take the artists’ creativity with both music and visual artists working in a shared passion for their art,” he says.

All 50 nominated album covers will be featured in an art installation in the window of the Hari hotel in London. The winners will also feature in several exhibitions put on by Art Vinyl over the year.

The designs can also be viewed online, on the Art Vinyl website.

What do you think of the winners? Let us know in the comments below…


All the latest moves, changes and appointments happening in the design world.
Launched and supported by the RCA’s Design Age Institute, these projects aim to show that aiding healthy ageing can be “desirable and commercially viable”.
The evidence and views received during this call will help the government office inform future policy and make changes where needed.
The new look “relives the glory days without getting stuck in the past”, with redrawn logos, updated typography and new colours and illustrations.
Copyright © 2022 Centaur Media plc and / or its subsidiaries and licensors. All rights reserved.
built by interconnect/it
Xeim Limited, Registered in England and Wales with number 05243851
Registered office at Floor M, 10 York Road, London, SE1 7ND