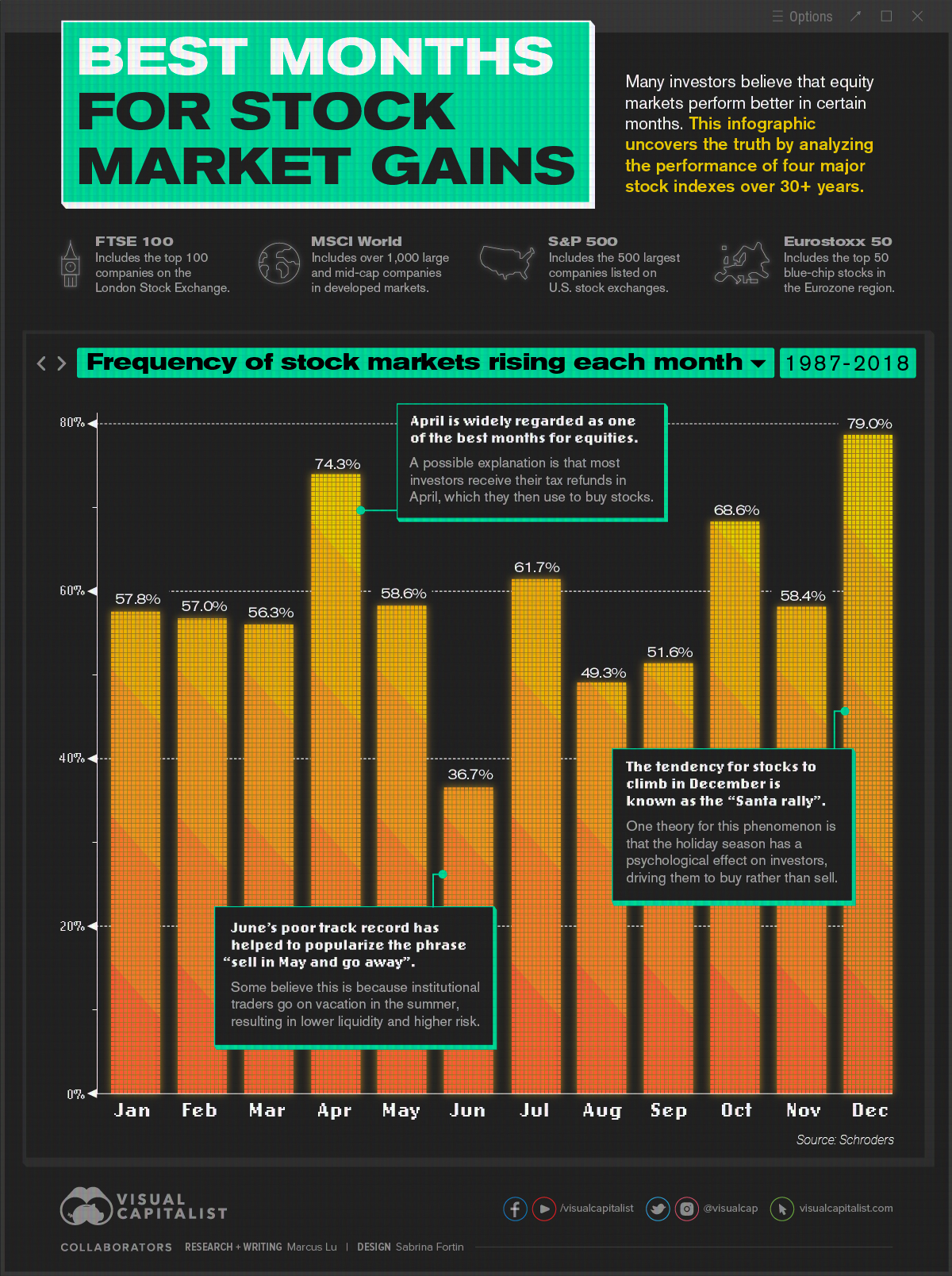 Many investors believe that equity markets perform better during certain times of the year.
Is there any truth to these claims, or is it superstitious nonsense? This infographic uses data gathered by Schroders, a British asset management firm, to investigate.
This analysis is based on 31 years of performance across four major stock indexes:
The percentages in the following table represent the historical frequency of these indexes rising in a given month, between the years 1987 and 2018. Months are ordered from best to worst, in descending order.
There are some outliers in this dataset that we’ll focus on below.
In terms of frequency of growth, December has historically been the best month to own stocks. This lines up with a phenomenon known as the “Santa Claus Rally”, which suggests that equity markets rally over Christmas.
One theory is that the holiday season has a psychological effect on investors, driving them to buy rather than sell. We can also hypothesize that many institutional investors are on vacation during this time. This could give bullish retail investors more sway over the direction of the market.
The second best month was April, which is commonly regarded as a strong month for the stock market. One theory is that many investors receive their tax refunds in April, which they then use to buy stocks. The resulting influx of cash pushes prices higher.
Speaking of higher prices, we can also look at this trend from the perspective of returns. Focusing on the S&P 500, and looking back to 1928, April has generated an average return of 0.88%. This is well above the all-month average of 0.47%.
The three worst months to own stocks, according to this analysis, are June, August, and September. Is it a coincidence that they’re all in the summer?
One theory for the season’s relative weakness is that institutional traders are on vacation, similar to December. Without the holiday cheer, however, the market is less frothy and the reduced liquidity leads to increased risk.
Whether you believe this or not, the data does show a convincing pattern. It’s for this reason that the phrase “sell in May and go away” has become popularized.
Investors should remember that this data is based on historical results, and should not be used to make forward-looking decisions in the stock market.
Anomalies like the COVID-19 pandemic in 2020 can have a profound impact on the world, and the market as a whole. Stock market performance during these times may deviate greatly from their historical averages seen above.
Regardless, this analysis can still be useful to investors who are trying to understand market movements. For example, if stocks rise in December without any clear catalyst, it could be the famed Santa Claus Rally at work.
30 Years of Gun Manufacturing in America
Catching the Growth of the Cannabis Industry
The World’s Largest Real Estate Investment Trusts (REITs)
Objects of Desire: Record Breaking Auction Sales in 2021
How Much Prime Real Estate Could You Buy for $1 Million?
The Richest People in the World in 2022
Three Emerging Trends in the Space Industry
If companies want their stock price to rise, why would they want to split it, effectively lowering the price? This infographic explains why.
Published
on
By
Imagine a shop window containing large pieces of cheese.
If the value of that cheese rises over time, the price may move beyond what the majority of people are willing to pay. This presents a problem as the store wants to continue selling cheese, and people still want to eat it.
The obvious solution is to divide the cheese into smaller pieces. That way, more people can once again afford to buy portions of it, and those who want more can simply buy more of the smaller pieces.