Our website uses cookies to improve your user experience. If you continue browsing, we assume that you consent to our use of cookies. More information can be found in our Cookies Policy and Privacy Policy .
The new visual identity has been developed by Lippincott and includes the letters ‘NYC’ hidden within a flag.
Lippincott has designed the new identity for NYC Pride, in a bid to “drive equity and awareness” around the work done by the organisation.

NYC Pride is the flagship event organised annually by Heritage of Pride – a non-profit born from the events of the Stonewall Uprising of 1969.

For decades, the event and its organisers have delivered support to the city’s LGBTQ+ citizens – but over the years the NYC brand had become watered down, Lippincott says.

“NYC Pride had an inconsistent brand identity that changed each year to reflect the event’s annual theme,” the studio says. “It needed a brand that endured.”

The new visual identity is centred around what Lippincott calls a “truly identifiable” flag emblem.

“The iconic Pride flag, which has become known as a universal symbol of safety, community, and allyship… [captures] the brand’s spirit of celebration and activism,” the studio says.

Alongside being an icon of Pride celebrations both past and present, the flag motif also subtly features the letters “NYC” – a nod to the deep roots the event has within its city.

Setting the emblem above other such logos is its “adaptive gradient”. The icon can appear in different colourways depending on the situation, which Lippincott says “provides storytelling flexibility” for the brand.

For example, when addressing a specifically non-binary audience, the emblem can appear in the colours of the non-binary identity flag – yellow, white, purple and black.

Typography is an important part of the updated identity. The adaptive emblem is paired with Monotype’s Knockout and Gotham font families, which were both designed by New York-based foundry Hoefler&Co.

Of Knockout, Monotype says the typeface has a “fighting spirit” and roots in the eclectic typography stylings of 19th century broadsides.

This is “perfectly counterbalanced” by Gotham, the foundry says, which has a “friendly openness” to it. Gotham has had several notable uses already, including in Barack Obama’s 2008 presidential campaign.

“Pride began as a protest, and we wanted to capture a typographic voice reminiscent of bold, eye-catching posters used by protestors,” says Lippincott partner Jenifer Lehker.

“Knockout and Gotham pay homage to the brand’s roots, while providing the visual boldness necessary to amplify the community’s voices.”

And like the emblem, the type can also adopt a “living gradient” where needed, Monotype says. 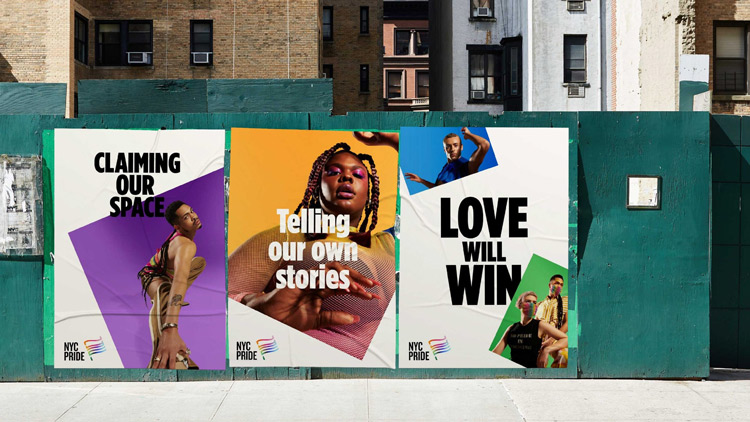 Supporting the main two elements of the brand is a visual style which Lippincott says is “bold and direct”. With it being used across a wide variety of touchpoints, events and environments, it needed to stand out and “adapt to evolving annual campaign themes”, the studio says.

The straight-forward nature of the typefaces is juxtaposed with photography from Cait Oppermann.

When the photography and typography meet, the images are always placed on a diagonal – an effect which the studio says adds an “ad-hoc” nature to the visual system.

With many of the communications for NYC Pride being made by volunteers and those without a design background, the simplicity of the system, alongside its built-in ad-hoc nature, is intended to reinforce that it is made for everyone to use. 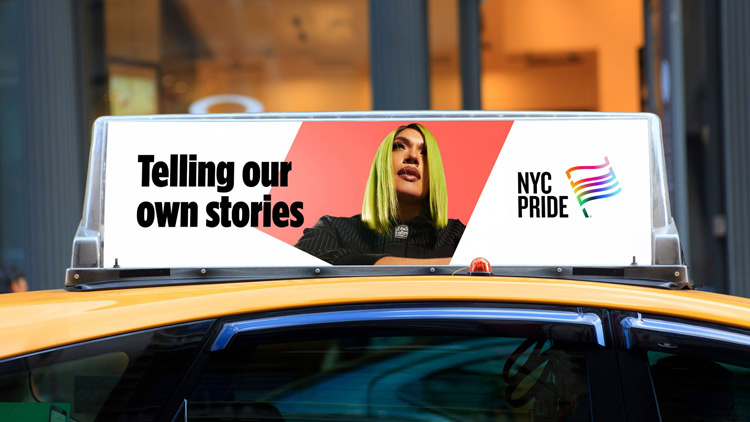 What do you think of the new NYC Pride look? Let us know in the comments below…


Matter Unlimited has branded the new media company, with details which reflect the “diversity of the Black American experience”.
NB Studio has designed the new identity for the touring ballet company, which was was looking for a “bolder brand” to reach diverse audiences.
The new look, which includes animation, a logo, website design and photography, aims to help the brand deliver its mission to “change spaces for good”.
With a date set for the closure of its current site, we explore what visitors can expect from the new museum, and which designers have been appointed to work on
Copyright © 2022 Centaur Media plc and / or its subsidiaries and licensors. All rights reserved.
built by interconnect/it
Xeim Limited, Registered in England and Wales with number 05243851
Registered office at Floor M, 10 York Road, London, SE1 7ND