Mapped: A Snapshot of Wealth in Africa – Visual Capitalist 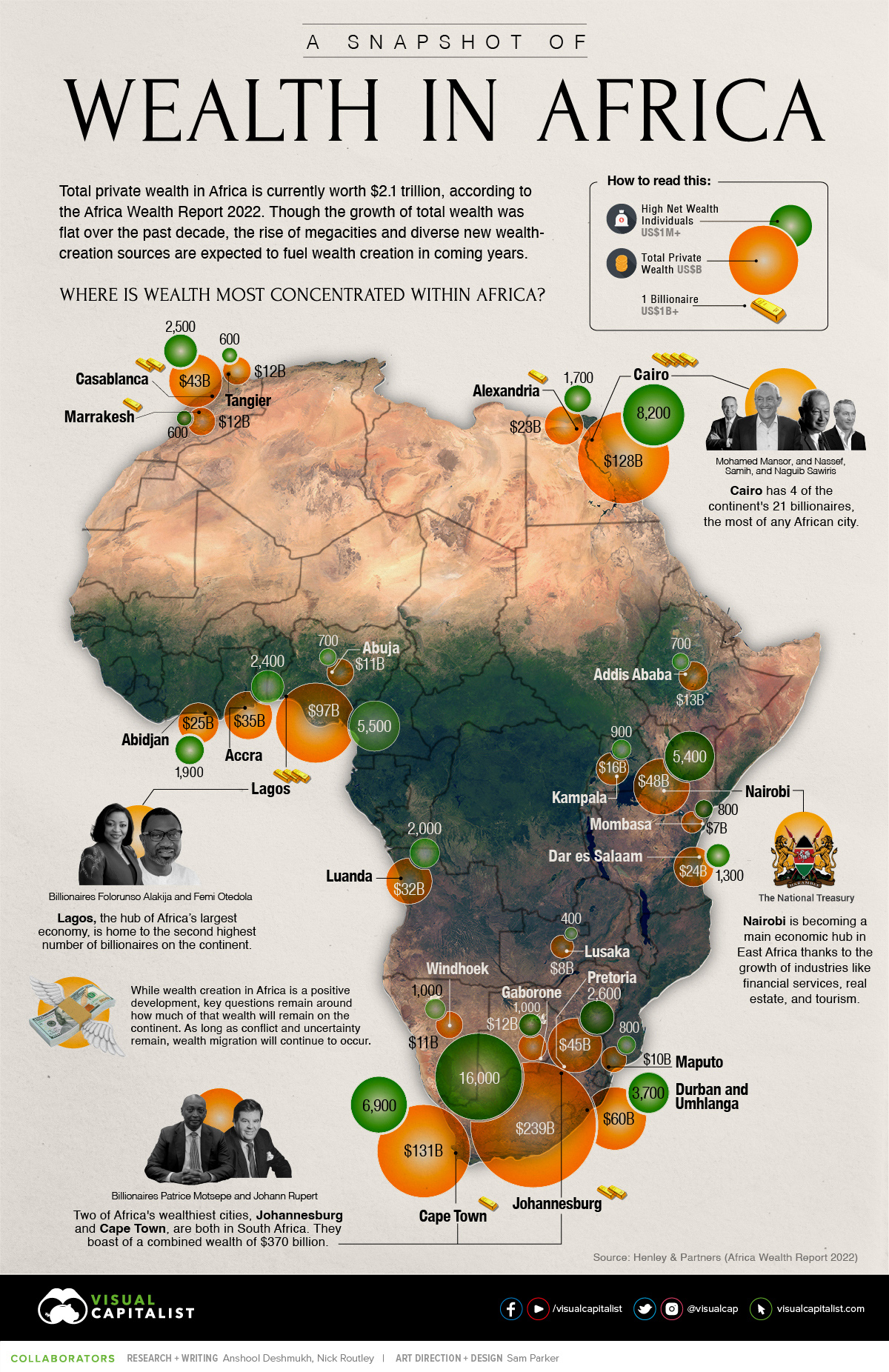 The continent of Africa contains more than 50 countries, but just five account for more than half of total wealth on the continent: South Africa, Egypt, Nigeria, Morocco, and Kenya.
Despite recent setbacks in Africa’s largest economies, wealth creation has been strong in a number of areas, and total private wealth is now estimated to be US$2.1 trillion. There also an estimated 21 billionaires in Africa today.
Drawing from the latest Africa Wealth Report, here’s a look at where all that wealth is concentrated around the continent.
South Africa is a still a major stronghold of wealth in Africa, with a robust luxury real estate market and ample wealth management services. The country is also ranked second on the continent in per capita wealth. That said, the country has faced challenges in recent years.
An estimated 4,500 high net worth individuals (wealth of US$1 million or more) have left South Africa over the past decade, migrating to places like the UK, Australia, and the United States. In one stark data point, the report points out that “there are 15 South African born billionaires in the world, but only 5 of them still live in South Africa.”
Here is how major African countries compare in terms of per capita wealth.
Mauritius is Africa’s wealthiest nation on a per capita basis. Here are a few reasons why the island nation comes out on top:
As a result, Mauritius has seen the strongest growth in total private wealth over the past decade, followed by Rwanda and Ethiopia. On the flip side of the equation, Nigeria—which is Africa’s largest economy—saw a steep drop in total wealth. The country has struggled in recent years with high unemployment, corruption, and an over-reliance on crude oil.
Over time, African countries are becoming less dependent on extractive industries, and business conditions are continuing to improve nearly across the board. These tailwinds, combined with the continent’s favorable demographics, point to a bright economic future for Africa.
The outlook for private wealth on the continent is largely positive as well. Total private wealth held in Africa is expected to reach US$3 trillion by 2031, an increase of close to 40%.
Mapped: The Wealthiest Billionaire in Each U.S. State in 2022
Mapped: The Wealthiest Billionaire in Each U.S. State in 2022
Mapping the Migration of the World’s Millionaires
Visualizing the Material Impact of Global Urbanization
Who Are the Russian Oligarchs?
Mapped: 30 Years of Deforestation and Forest Growth, by Country
Mapped: Economic Freedom Around the World
America is home to the most billionaires in the world. But which billionaire is the richest in each state?
Published
on
By
The U.S. is home to over a quarter of the world’s billionaires, representing about 720 of the roughly 2,700 that exist globally.
While the country has more billionaires than any other, the U.S. share of global billionaires has actually been shrinking in recent decades. In 2010, about 40% of the world’s billionaire population lived in America⁠—and today, that number is closer to 27%.
But who is the richest billionaire in every American state in 2022? This graphic uses data from Forbes to find out.
The billionaires on this list have made their fortune in a wide range of industries, including tech, automobiles, asset management, and video games.
Jeff Bezos and Elon Musk have had their relative fortunes fluctuate in tandem with Amazon and Tesla stock prices in recent years. The volatility in share prices has meant they’ve each carried the title of the world’s wealthiest person at varying points.
Jeff Bezos previously had the top spot but now has a net worth of $162 billion. While he’s stepped down from the CEO role and has sold large amounts of Amazon stock, his ranking will likely still tie in closely to the company’s performance for the foreseeable future.
Elon Musk is the richest billionaire in Texas, however, he only recently became a resident of the state. His move is part of a broader migration trend occurring in the U.S. today, where California is experiencing a population decline for the first time ever. Last year, 68% of counties in California saw population declines, and data from the U.S. Census Bureau suggests many of these Americans opted for states like Florida and Texas.
Between 2019 to 2021, the South is the only region that saw positive net flows of over a million people, while the Northeast, Midwest, and West all saw declines.
Warren Buffett, the “Oracle of Omaha,” is the richest billionaire in Nebraska by a wide margin, with a net worth of $105 billion. Despite the stock market experiencing one of its worst starts to the year historically, Buffett’s net worth has been surprisingly steady.
This might be due to value assets rotating back into fashion in favor of growth and tech themes this year. Also, historically Buffett has been bullish in environments where fear and negative sentiment reflect through lower asset prices.
There are eight different women that hold the title of richest billionaire in their state.
Tamara Gustavson is Public Storage’s largest shareholder, with an 11% stake in the company, valued at $60 billion on the New York Stock Exchange. In addition, she acts as the director of the company and is the daughter of founder B. Wayne Hughes, who recently passed away last year. Incredibly, Public Storage operates more than 170 million square feet of real estate.
Abigail Johnson and Jacqueline Mars were featured on our infographic showing the richest women in the world last year. Johnson has served as CEO of top asset manager Fidelity, which her grandfather Edward Johnson founded. And Jacqueline Mars is part of the Mars family, which owns the world’s largest candy maker.
The U.S. wealth landscape is one of extremes. On one end, there are ample opportunities to earn substantial wealth, but on the other, wealth inequality and income disparity are higher than many other peer countries.
This productivity and hustle-oriented culture suggests that while there isn’t a billionaire in every state in 2022, it seems like it’s only a matter of time before the likes of Alabama, New Mexico, and North Dakota add a billionaire to their ranks.
Central bank digital currencies are coming, but progress varies greatly from country to country. View the infographic to learn more.
Published
on
By
Central banks around the world are getting involved in digital currencies, but some are further ahead than others.
In this map, we used data from the Atlantic Council’s Currency Tracker to visualize the state of each central banks’ digital currency effort.
Digital currencies have been around since the 1980s, but didn’t become widely popular until the launch of Bitcoin in 2009. Today, there are thousands of digital currencies in existence, also referred to as “cryptocurrencies”.
A defining feature of cryptocurrencies is that they are based on a blockchain ledger. Blockchains can be either decentralized or centralized, but the most known cryptocurrencies today (Bitcoin, Ethereum, etc.) tend to be decentralized in nature. This makes transfers and payments very difficult to trace because there is no single entity with full control.
Government-issued digital currencies, on the other hand, will be controlled by a central bank and are likely to be easily trackable. They would have the same value as the local cash currency, but instead issued digitally with no physical form.
105 countries are currently exploring centralized digital currencies. Together, they represent 95% of global GDP. The table below lists the data used in the infographic.
When aggregated, we can see that the majority of countries are in the research stage.

A major benefit of government-issued digital currencies is that they can improve access for underbanked people.
This is not a huge issue in developed countries like the U.S., but many people in developing nations have no access to banks and other financial services (hence the term underbanked). As the number of internet users continues to climb, digital currencies represent a sound solution.
To learn more about this topic, visit this article from Global Finance, which lists the world’s most underbanked countries in 2021.
Just 9% of countries have launched a digital currency to date.
This includes Nigeria, which became the first African country to do so in October 2021. Half of the country’s 200 million population is believed to have no access to bank accounts.
Adoption of the eNaira (the digital version of the naira) has so far been relatively sluggish. The eNaira app has accumulated 700,000 downloads as of April 2022. That’s equal to 0.35% of the population, though not all of the downloads are users in Nigeria.
Conversely, 33.4 million Nigerians were reported to be trading or owning crypto assets, despite the Central Bank of Nigeria’s attempts to restrict usage.
America’s central bank, the Federal Reserve, has not decided on whether it will implement a central bank digital currency (CBDC).
Our key focus is on whether and how a CBDC could improve on an already safe and efficient U.S. domestic payments system.
– Federal Reserve
To learn more, check out the Federal Reserve’s January 2022 paper on the pros and cons of CBDCs.
Mapped: The Wealthiest Billionaire in Each U.S. State in 2022
Ranked: Top 10 Countries by Military Spending
Ranked: The Most and Least Livable Cities in 2022
Brand Loyalty is Declining for Most Luxury Automakers
Sharpen Your Thinking with These 10 Powerful Cognitive Razors
Ranked: The Top 25 Islands to Visit in 2022
Visualizing Major Layoffs At U.S. Corporations
Visualized: The Value of U.S. Imports of Goods by State
Copyright © 2022 Visual Capitalist