Each year we see a number of films hit screes, however from the multitude only a few go on to create an impact at the box office, while even fewer achieve cult status. However, in the recent past, we have seen an increase in the number of films that have been making it to the Rs. 100 cr. mark at the box office. But what makes a film manage to cross this much-coveted mark is the question of the hour. In this infographic, Bollywood Hungama takes a look at the average ticket price of the highest grossers of the year to gain a better understanding, of whether ticket prices play a role in helping a film achieve big numbers at the box office. Earlier in Part 1, we look at releases from 2011 to 2015 and how ticket prices affected their box office performance, in this segment, we look at releases from 2016 to 2020. 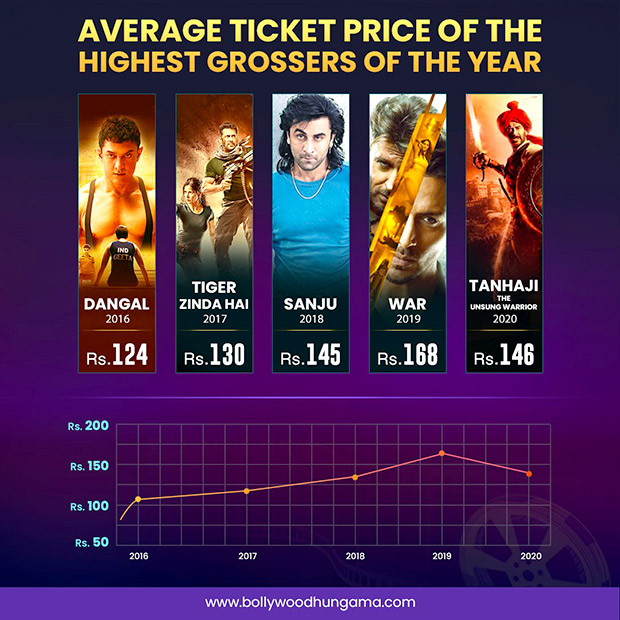 1. Dangal: The Nitesh Tiwari directed Aamir Khan starrer Dangal that released in 2016 was based on the life of an Indian wrestler. The film which featured immense hype and promotion in the run-up to its release saw its average ticket price at Rs. 124. Not surprisingly, the film collected a staggering Rs. 387.38 cr. at the box office.
2. Tiger Zinda Hai: The 2017 release Tiger Zinda Hai which was a sequel to the Salman Khan-Katrina Kaif starrer Ek Tha Tiger did rather well at the box office. With its average ticket price at Rs. 130 the film managed to draw in Rs. 339.16 cr. at the box office.
3. Sanju: One of the most controversial and talked about films in recent times was the Ranbir Kapoor-Anushka Shrma starrer Sanju. Based on the life of actor Sanjay Dutt, the film received both praise and flak for its storyline. However, with an average ticket price of Rs. 145 Sanju made it big at the box office window with Rs. 342.53 cr. coming in.
4. War: The Hrithik Roshan – Tiger Shroff stylized action flick War was the talk of the town when it was released in 2019. With high octane stunts, and of course mind-numbing action, the film set the box office register riming. With an average ticket price of Rs. 168 War managed to rake in Rs. 317.91 cr. at the box office.
5. Tanhaji – The Unsung Warrior: The year the pandemic kicked in and sent nations into lockdown 2020 will forever be remembered as a year that was lost. With business across the board suffering due to the lockdown, only a few releases managed to hit screens, one among them was the Ajay Devgn starrer Tanhaji – The Unsung Warrior. With an average ticket price of Rs. 146 the film managed to draw in Rs. 279.55 cr.
Also Read: Infographic: Average ticket prices at the box office of the highest grossers of the year (from 2011 to 2015) – Part 1
Catch us for latest Bollywood News, New Bollywood Movies update, Box office collection, New Movies Release , Bollywood News Hindi, Entertainment News, Bollywood Live News Today & upcoming movies 2022 and stay updated with latest hindi movies only on Bollywood Hungama.
No Releated Data