Our website uses cookies to improve your user experience. If you continue browsing, we assume that you consent to our use of cookies. More information can be found in our Cookies Policy and Privacy Policy .
Brompton chief design and engineering officer Will Carleysmith reveals the changes taking place at the British bike brand as it looks to an international future.
When Brompton founder Andrew Ritchie was designing the prototype for his folding bike, he only had to look opposite his flat for naming inspiration: South Kensington’s Brompton Oratory. Since those days in the 1970s, the bike brand has notched milestones far and wide: full-time production at its first factory in West London, a Brompton World Championship held in Barcelona in 2006, and a store opening in Kobe, Japan in 2011.

Though it has remained a British brand with offices in London, the design influence spans far and wide, according to chief design and engineering officer Will Carleysmith. From three-story walk-ups in New York to a sizeable Asian consumer base, the team has a wide-reaching and unhurried approach, considering trends over five-year periods.

As the new T Line – Brompton’s lightest ever model – launches, Carleysmith takes us behind the scenes of the design process.


Carleysmith manages multiple teams, split between 25 designers, 31 engineerers and 12 in new project introduction. In total, Brompton employs more than 650 around the world, working to produce around 80,000 bikes a year. Its goal is to hit 100,000 in the near future.

“We are problem led,” Carleysmith says, explaining that his teams use the word “tool” often. “It’s a tool for doing a job, as well as a tool for solving a problem,” he adds. Take the T Line, which has a titanium frame, weighs 7.45kg and has been in development for three years. While weight is usually associated with performance – “people who want to go up mountains fractionally faster than other people” – Brompton is focused on its users’ problems. “We’re interested in weight because it allows you to live with a product,” Carleysmith says. “If you go to a New York, and you’re three floors up in a brownstone, [less] weight means you can run upstairs.”

Most of the employees are also Brompton users: they commute, run errands, and go to the pub on a Brompton. This gives the team a sense of what makes Brompton good (you can take it to the cinema) and also bad (where can you store it at the cinema?). Not all hires need to be “Brompton nerds”, as Carleysmith calls them, “but we try to convert people to Brompton.”


Carleysmith outlines a highly collaborative design process. With the T Line, the team started by hashing out the priorities. With lightness in mind, the designers discussed the possibility of a more fragile design. After deciding that the bike had to be as tough and durable as other models, designers follow specialist paths – from materials to performance to manufacturing. One detail of the finished design is a steel-armoured seat post, with a 0.3mm steel “armour”. This aims to withstand the use of a folding bike, carry loads of over 100kg and is suitable for all weather riding.

One crucial part of the process is Brompton’s partnerships. For its 2017 electric bike, Brompton worked with Williams Advanced Engineering. Working with titanium on the T Line – an “exotic material” – Brompton sought out material specialists from military, aerospace and sporting goods sector. “Once you’ve found the partners, you’re flying,” he says. Working with a new material also means investing in new production facilities, though Brompton aims to think in five-year cycles which means that investment is less painful and risky, Carleysmith explains.

Meanwhile the feedback process is fairly immediate. “The factory is just outside the window,” Carleysmith adds. “So if you design something that’s not good to manufacture, you will find out within ten minutes.” 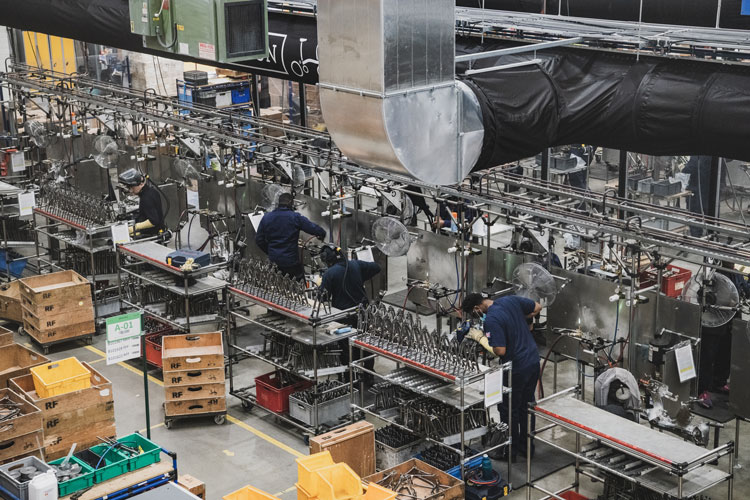 While the team used to be made up of all rounders, Brompton has been able to diversify with growth, explains Carleysmith. Manufacturing specialists mean that the business can explore cutting-edge techniques, for instance. Digital skills have also become a significant focus in recent years, leaning on the kind of design optimisation regularly found in automotive industries, according to the designer. “We wouldn’t have been able to do that as a smaller business,” he adds.

In terms of time scale, a prototype of the T Line was created after around 10 months. After that, there’s a period of iteration – finding the weak points and working out the technology that will be needed for production. The “slow grind” of iteration can sometimes be disrupted by out-of-office inspiration. On T Line, Carleysmith recalls a lightbulb moment at the departure lounge after visiting a supplier in Taipei.


Carleysmith compares Brompton’s design process to a duck: calm on the surface, but with a “hell of a lot going on below”. People are often surprised by the scale of the business, he says. “We’re no longer the niche manufacturer under the railway arches,” he adds. The team juggles multiple projects at once; working on new models, improvement in existing products, developing software for the ebikes.

There’s also an international audience to consider. Though they are a London-centric brand, Brompton exports three quarters of what it makes overseas, with a growing base in Asia. The challenge is understanding what motivates a customer in these countries where they might be buying the bike for leisure not utility. They might also have a very different set of living conditions. Carleysmith cites Singapore – somewhere where a dense urban infrastructure makes storage hard.


“Nothing quite beats when you actually have something physical in your hands for the first time,” Carleysmith says, “or even better – you build it into a prototype bike and you ride it.”

Bromptons also get around. Radiohead’s Thom Yorke is a long time fan, using the bike to escape the tour bubble, according to Carleysmith. Last year, Brompton teamed up with 13 artists – including Radiohead, Phoebe Bridgers and Enrique Iglesias – on custom bikes which were auctioned off to support live music crews impacted by the pandemic. The Radiohead design sold for over £17,000, making it the most expensive Brompton ever.

Outside of the celebrity sphere, working for Brompton means you come face-to-face with passionate customers, explains Carleysmith. “You’re going around the city and chatting to someone at the traffic lights,” he says, “and they tell you that they like this and they don’t like that.”


Brompton wants to be part of the conversation around urban mobility. While the folding bike was initially designed to solve London-centric problems, the universal design problem now is urban living, according to the designer. “Anywhere you squish human beings together, you create the same set of problems and the same opportunities,” he says. One of those problems is cycling safety; in 2020 six cyclists were killed, while the number of serious cycling-related injuries totalled 862. As well as engaging in wider infrastructure problems, Carleysmith outlines product design features such as better visibility.

Electrification is perhaps the most important issue. For a brand associated with last-mile journeys, electrified bikes are a “game changer”, Carleysmith says. This doesn’t just cover the hardware but software – how the bike is connected to its owner and wider environment. At the moment, there is an app which provides “basic functionality” (a dashboard indicating mileage) but there are plenty of opportunities in this field such as personalisation, according to Carleysmith. He also envisions an app that would notify owners about maintenance. “I think the companies that really master electric mobility can succeed,” he adds. “Their future is outstandingly bright.”

Read more about our in-house design series, where we speak to teams at Lego, Facebook and more.


The evidence and views received during this call will help the government office inform future policy and make changes where needed.
The new look “relives the glory days without getting stuck in the past”, with redrawn logos, updated typography and new colours and illustrations.
Beijing 2022 looks set to embrace the future-facing world of winter sports, while also recalling the 2008 Games.
PickupMyPeriod has been designed by Edinburgh-based Pogo Studio and allows users to find one of 700 locations where free products can be found.
Copyright © 2022 Centaur Media plc and / or its subsidiaries and licensors. All rights reserved.
built by interconnect/it
Xeim Limited, Registered in England and Wales with number 05243851
Registered office at Floor M, 10 York Road, London, SE1 7ND