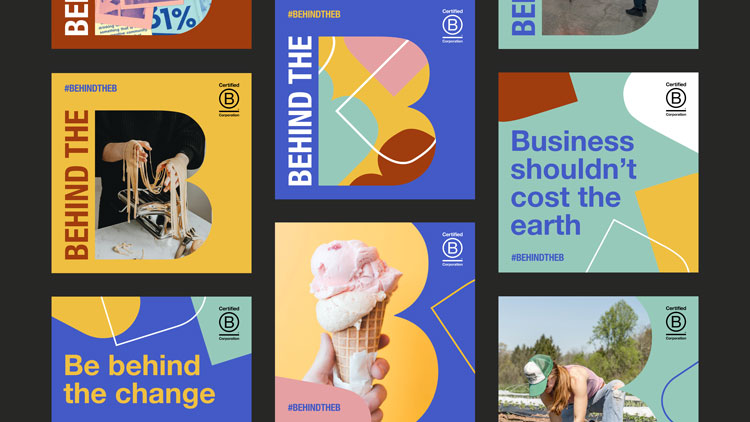 March was B Corp month – an annual campaign designed to celebrate and raise awareness around all things B Corp (the certification means business are meeting high standards of social and environmental measures). London consultancy Nice and Serious teamed up with Falmouth studio King and Sparrow and Innocent’s in-house team on a campaign which aimed to highlight the work of the over 4,600 B Corps around the world. The result is the Behind the B toolkit, crafted to let businesses build awareness campaigns on social media and other OOH channels. The letter ‘B’ acted as a framing device across visuals; businesses were able to apply their own imagery to show what goes on behind the scenes at a B Corp. All three of the creative teams are B Corps themselves. 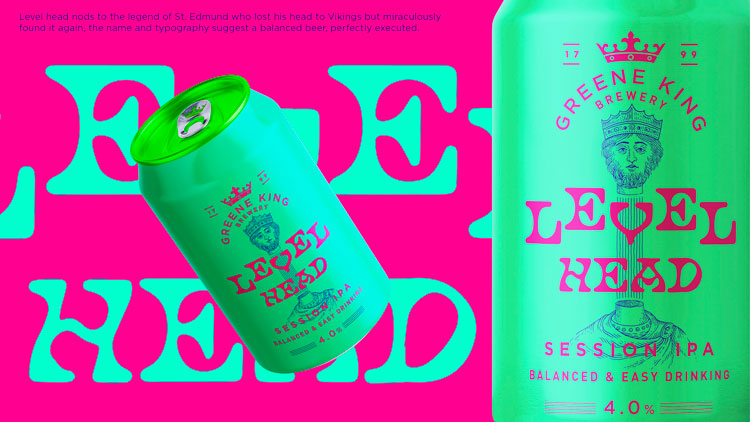 When it came to designing a new range of beers for one of the UK’s oldest breweries, Design Studio looked to Britain’s past for inspiration. Greene King’s range of four craft beers all feature designs inspired by folklore tales from British history. There’s Level Head, a session IPA, which recalls the legend of St. Edmund – an East Anglian king whose decapitated head was said to have been returned to his body by a talking wolf. In Design Bridge’s design, the detached head portrays a “perfectly executed beer”. Western Zeph meanwhile draws on the transatlantic journey made by West Country pilgrims to America in the 17th century. To contrast with the ancient legends, the studio has employed a neon colour palette and distinctive type choices.


Tom Odell’s latest song, Best Day of My Life, is all about muted optimism. While the title suggests something more upbeat, the music and lyrics are a more reflective take on happiness. For its music video, Nexus Studios tapped into that ambiguity with “hypnotic” animation, inspired by post-pandemic emotions and the highs and lows of everyday life. The relatively simple video depicts a cyclist exploring a city, with a changing backdrop of falling leaves and road markings. “I drew the cyclist front on, facing us, to reflect Tom’s openness and the process of shedding inhibitions,” says Nexus Studios director Manshen Lo. Lo has also recently designed the cover for Sally Rooney’s latest novel Beautiful World, Where Are you. The character was purposefully designed as gender neutral, Lo explains, and the drawings were animated by Duncan Gist.


Design has long been used as a tool to make hospital environments a more comfortable place for patients. A new project from children’s hospital arts programme Artfelt and digital design studio Everyone Forever brings the hospital walls of Sheffield Children’s Hospital to life. Young patients on the cancer and leukaemia ward will now be able to watch a series of colourful characters – from flamingos to elephants – come to life in their surroundings. The projections aim to provide a distraction for the patients, but also to generate funding for the unit, explain the design teams behind the project. People are able to donate through an app and choose animals to come to life – meaning that they can entertain patients from afar.

For Them, a queer wellness brand aimed at the “gender-expansive community”, revealed a nature-inspired rebrand this month. At the moment, the brand’s main product is a range of chest binders though it’s launching a membership scheme soon. The new look was led by designer Alex Pankiv Greene along with the brand’s in-house creative director Kate Vozella. The design team looked to the natural world as a place “where authentic fluidity, evolution and expansiveness are already present”. A set of icons, for example, draws on the natural world’s fluid shapes. The former branding’s “feminine” colour palette has been replaced by an expanded range of hues too in the hopes of crafting a “bolder and eye-catching” look. A big focus has been the typography, where the designers have sought to balance “dominant heavy lines with soft twirly cursive”. That can be seen in the new wordmark – attempt to express “queerness as a fruitful tension between contrasts”, according to the design team.


A new exhibition on the design of all things football and a Black designer’s view of industry are among our top picks this month.
Blond’s Fold charger seeks to make people more aware of their tech products’ environmental impact.
The impact investing app previously known as Tickr has a new name and look – all inspired by a world some 3,000 years in the future.
Elmwood has redesigned the international gum brand’s identity, with a focus on its “ding” symbol and pop art-inspired visuals.
Copyright © 2022 Centaur Media plc and / or its subsidiaries and licensors. All rights reserved.
built by interconnect/it
Xeim Limited, Registered in England and Wales with number 05243851
Registered office at Floor M, 10 York Road, London, SE1 7ND