News
General News
Experts
Investment
Sustainability
Airbnb
Technology
F&B
Africa
Americas
Asia Pacific
Europe
Middle East
Marriott
Hilton
IHG
Accor
Hyatt
Radisson
Wyndham
Choice
Kempinski
Sheraton
LOTTE
Project of the Week
Hotel Projects
New Hotels
Expansions
Refurbishments
Resources
Infographics
Construction Reports
Videos
Design Concept
Design Vision
Design Showcase
Boutique Hotel
Andy Mannhart
Emu Group
Hera
Kaldewei
Klein Iberica
MetallArt
Oliver Hemming
Revol Porcelaine
Talenti
Wood Couture
by Lauren Jade Hill | 15 Mar 2022 | Hotel Projects, Projects
The TOPHOTELPROJECTS construction database gives us insights into an array of exciting hotels coming to the Emerald Isle, including the latest on a major mixed-use development.
Ireland is set to welcome an impressive 78 hotel projects, which will together comprise 11,304 new rooms, according to research.
The coming years are set to transform Ireland’s hotel scene. According to the TOPHOTELPROJECTS construction database, 21 hotels are on track to make their debut in 2022, and this year’s openings will be followed by a projected 11 launches in 2023. Three openings are currently planned for 2024, and as many as 43 projects are being lined up for completion in 2025 and beyond.
Together, these debuts will bring 3,350 rooms to Ireland over the coming year, with 1,457 expected next year, 927 in 2024 and 5,570 from 2025 onwards.
Of these 78 projects, 68 will be in the four-star category, while the remaining ten are targeting the luxury five-star market.
In terms of development, Dublin is attracting most of the attention, with 52 projects happening across the capital. Cork is due to receive eight hotels, meanwhile, and Kilkenny has been earmarked for three new properties. 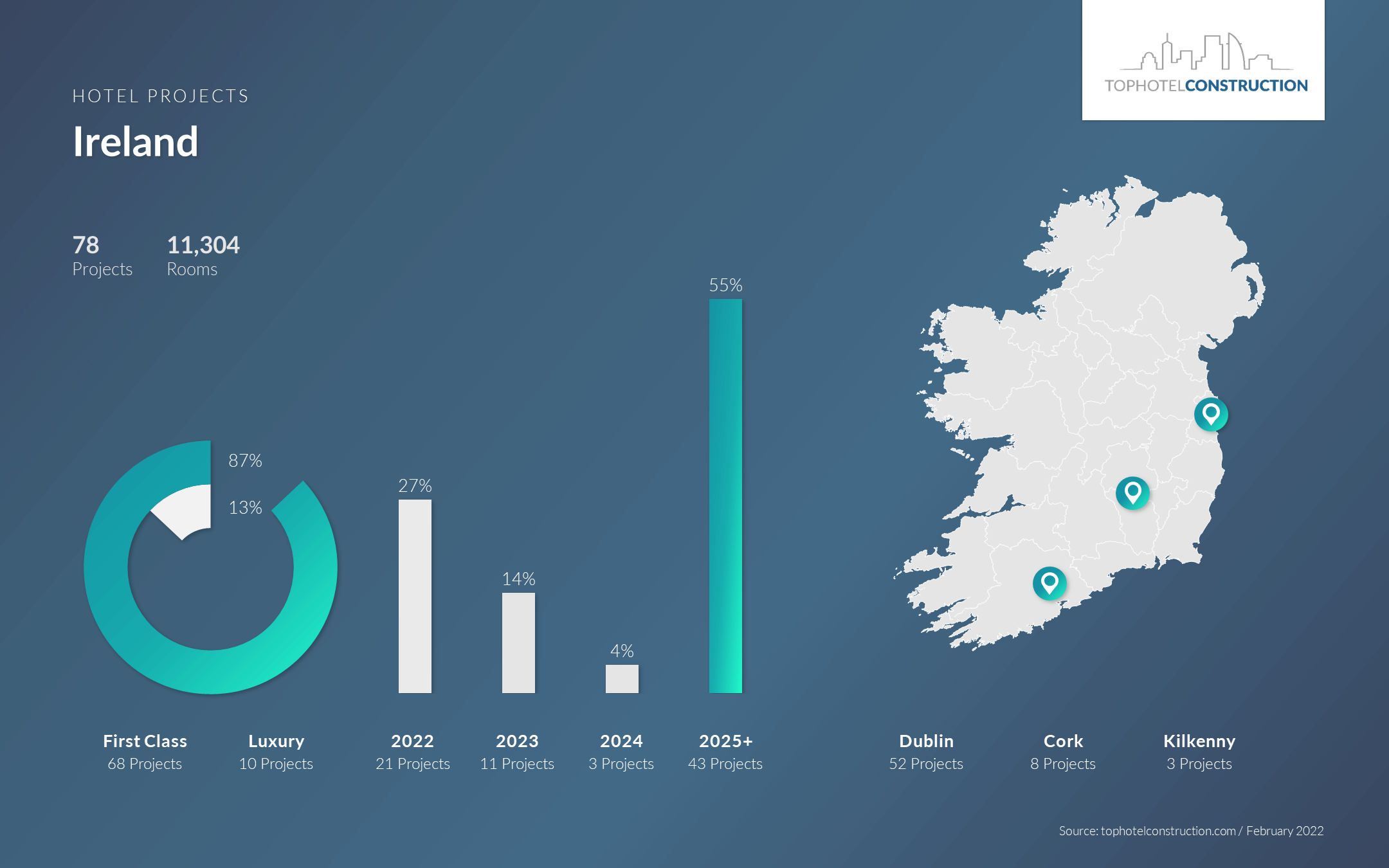 Standout projects within this influx include Maldron Hotel Merrion Road in Dublin and Crown Square Hotel in Galway.
The four-star newbuild Maldron Hotel Merrion Road is set to open in June 2022 on the former Tara Towers Hotel site in Dublin 4, placing guests close to the RDS Arena and Aviva Stadium. The complex will comprise 69 residential units and a basement carpark, in addition to the 140-key hotel.
Owned by Dalata Hotel Group, with help from Mola Architecture on the architectural design, this new four-star hotel will incorporate a restaurant, a bar and meeting rooms.
Meanwhile, Crown Square Hotel forms part of Galway’s Crown Square development on the east side of the city. Currently under construction, the four-star 180-key hotel is expected to open in the first quarter of 2023.
The scheme is being brought to life by architect Henry J Lyons, with landscape design courtesy of Cunnane Stratton Reynolds – Galway. Sustainability is the focus here, with all aspects of the project created with the environment in mind.
Designed to engage hotel guests, residents and locals alike, the wider site will comprise an array of amenities including a creche, a fitness facility, a medical centre, a pharmacy, cafés, a foodhall and a walking track.
Many TOPHOTELNEWS articles draw on exclusive information from the TOPHOTELPROJECTS construction database. This subscription-based product includes details of thousands of hotel projects around the world, along with the key decision-makers behind them. Please note, our data may differ from records held by other organisations. Generally, the database focuses on four- and five-star schemes of significant scale; tracks projects in either the vision, pre-planning, planning, under-construction, pre-opening or newly opened phase; and covers newbuilds, extensions, refurbishments and conversions.
Learn more
Related Articles
Mar 14, 2022
The hotel and resort management company has added two properties in the Mile High City, both of which have been earmarked for multimillion-dollar refurbishments, to its portfolio. DoubleTree by Hilton Hotel Denver and DoubleTree by Hilton Denver Central Park are the…
Mar 14, 2022
Six Senses New York (imagery: © HFZ Capital Group) This exciting development by IHG’s luxury brand in the Big Apple, which brings together the talents of a stellar design team, has scooped our latest Project of the Week title. The forthcoming hotel is already turning…
Mar 13, 2022
Boasting 1,080 rooms and more than 25,000 sq ft of event facilities, Hilton Singapore Orchard is the result of a refurbishment of the former Mandarin Orchard Singapore. Hilton Worldwide’s sprawling new outpost in South-East Asia is certainly turning plenty of heads….
Mar 12, 2022
The French hospitality giant has expanded its partnership with Boutique Corporation Public Company with the signing of a 143-room scheme in northern Thailand. A new Ibis property will soon be created in Chiang Mai, one of South-East Asia’s most-visited tourism…
Mar 11, 2022
Showcasing the work of 361°Arquitectos, the first Hilton Worldwide-branded hotel in the Peruvian city of Trujillo is up and running after converting to the DoubleTree by Hilton brand. DoubleTree by Hilton Trujillo has started welcoming guests to one of Peru’s largest…
Mar 11, 2022
Construction of a Tribe-branded scheme, featuring 412 rooms and suites, in the heart of Airport City Manchester’s ambitious new hotel district is now underway. Another hospitality scheme has moved a step closer to becoming a reality at the biggest airport in northern…