News
General News
Experts
Investment
Sustainability
Airbnb
Technology
F&B
Africa
Americas
Asia Pacific
Europe
Middle East
Marriott
Hilton
IHG
Accor
Hyatt
Radisson
Wyndham
Choice
Kempinski
Sheraton
LOTTE
Project of the Week
Hotel Projects
New Hotels
Expansions
Refurbishments
Resources
Infographics
Construction Reports
Videos
Design Concept
Design Vision
Design Showcase
Boutique Hotel
Archetype
Commtech Asia
Geberit
Hera
Kaldewei
Laufen
Victoria Albert
Wood Couture
by Lauren Jade Hill | 03 May 2022 | Projects
Hotel Cherrywood Town Centre (Image by © Hines)
The TOPHOTELPROJECTS construction database reveals details of 51 hotel projects currently in the planning, construction or pre-opening phase across Dublin.
Standout projects from this development line-up include a new property by The Standard and a luxury hotel within the largest single urban development project in Ireland.
Dublin is on track to welcoming 7,390 new rooms across 51 hotel projects. Seven of these hotels, with 1,087 rooms between them, will fall into the five-star category. These will then be joined by 44 four-star properties with a total of 6,303 rooms.
Currently, 11 of these hotels, and 2,106 rooms, are set to launch in 2022. Another six hotels with 794 rooms are to launch in 2023, followed by two hotel openings with 517 rooms in 2024 and 32 hotel openings with 3,973 rooms in 2025 and beyond.
One of these 51 projects is in the vision stage, six are at the pre-planning stage, 28 are in planning, 10 are under construction and six are now in the pre-opening phase. 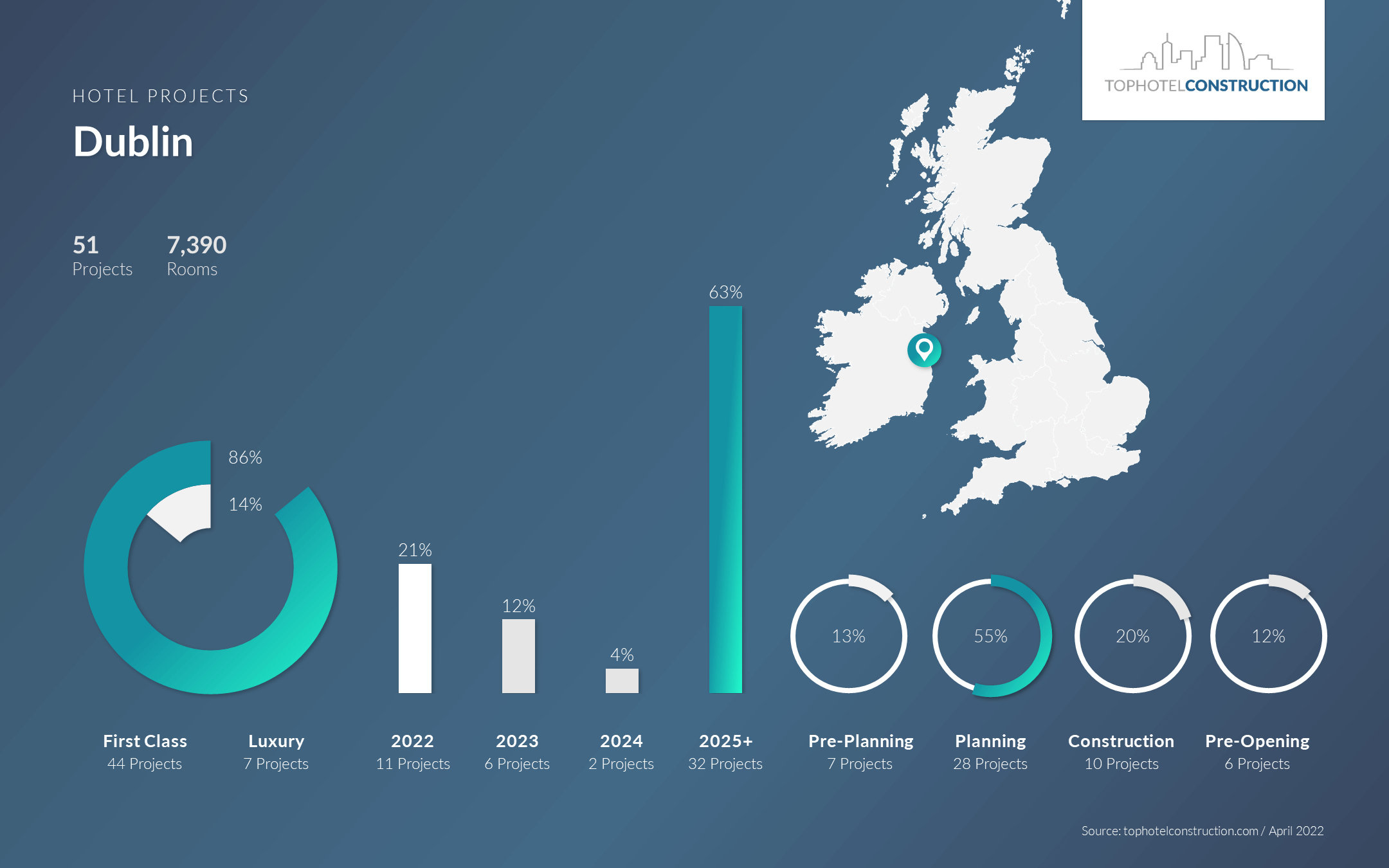 Among the city’s most notable hotel projects is the early-2025-opening 200-key The Standard Hotel Dublin Arch. This is a part of the mixed-use site being developed by Ballymore Ireland at Dublin Arch, which was previously known as Connolly Quarter.
This development spanning around 111,000 sq m will encompass residences, restaurants, community clubs and artists’ studios, as well as office space and what’s set to become Ireland’s first Standard Hotel.
Another exciting forthcoming addition to the city’s hotel scene, Hotel Cherrywood Town Centre is then set to open as a part of another significant urban development, with the opening date yet to be announced.
The five-star, 204-key hotel will be a part of the largest single urban development project in Ireland, which is to encompass build-to-rent apartments, shops, restaurants and bars, office space and this hotel. The site will prioritise pedestrians and bike users.
Many TOPHOTELNEWS articles draw on exclusive information from the TOPHOTELPROJECTS construction database. This subscription-based product includes details of thousands of hotel projects around the world, along with the key decision-makers behind them. Please note, our data may differ from records held by other organisations. Generally, the database focuses on four- and five-star schemes of significant scale; tracks projects in either the vision, pre-planning, planning, under-construction, pre-opening or newly opened phase; and covers newbuilds, extensions, refurbishments and conversions.
Learn more
Related Articles
May 6, 2022
Imagery ©2022 Hilton DoubleTree by Hilton Fujairah City Centre is set to open as a part of the mixed-use development known as Al Taif Business Centre. The hotel will cater to both business and leisure travellers with an array of amenities and proximity to…
May 5, 2022
Ennismore and ActivumSG Capital Management have announced the signing of a long-term management agreement bringing the SLS brand to Europe for the first time. This milestone development for the lifestyle brand is located next to the beach and fronts the marina of a…
May 5, 2022
Radisson Hotel Group aims to have over 50 hotels in Turkey by the end of 2023, moving its target timeline forward from 2025. This year, the group aims to heighten its presence in Turkey by opening an additional 10 hotels while introducing its Radisson Individuals and…
May 4, 2022
The One Tampa City Center hotel has announced the completion of the final phase in its multi-year renovation. The hotel’s new look spans reimagined guest rooms and suites, public spaces, the lobby and restaurant. An elevated hotel experience The 520-key Hilton Tampa…
May 4, 2022
Images by Sivan Askayo Kempinski has announced the highly anticipated debut of The David Kempinksi Tel Aviv in Israel. Kempinski 80th global opening, this new property reflects the brand’s ethos of combining heritage and leisurely luxury with European hospitality and…
May 3, 2022
Imagery: Radisson Hotel Group Radisson Hotel Group has entered Ghana for the first time with the opening of Number One Oxford Street Hotel & Suites, a member of Radisson Individuals. This milestone debut in the Osu neighbourhood of Accra marks the second Radisson…

IN THIS ARTICLE
Dublin | Europe | Ireland
The Standard