News
General News
Experts
Investment
Sustainability
Airbnb
Technology
F&B
Africa
Americas
Asia Pacific
Europe
Middle East
Marriott
Hilton
IHG
Accor
Hyatt
Radisson
Wyndham
Choice
Kempinski
Sheraton
LOTTE
Project of the Week
Hotel Projects
New Hotels
Expansions
Refurbishments
Resources
Infographics
Construction Reports
Videos
Design Concept
Design Vision
Design Showcase
Boutique Hotel
Andy Mannhart
Emu Group
Hera
Kaldewei
Klein Iberica
MetallArt
Oliver Hemming
Revol Porcelaine
Talenti
Wood Couture
by Richard Frost | 10 Feb 2022 | Chains
Hyatt Place Brisbane South City Square
Hyatt Hotels Corporation’s upscale brand is growing more rapidly in the People’s Republic than in any other country, our dedicated TOPHOTELPROJECTS research team can reveal.
The TOPHOTELPROJECTS construction database shows that Hyatt Place has 87 projects with 15,013 rooms in the pipeline globally, although much of its activity involves the world’s most populous nation, rather than its traditional US heartlands.
We’ve discovered that Hyatt Hotels Corporation’s prolific upscale flag has a staggering 31 schemes and 6,487 keys on its books throughout China. This is significantly larger than the size of its development slate in the US, which is after all the Chicago-headquartered hospitality company’s home market, where 23 properties with 2,982 rooms are being planned. Canada rounds out the top three, meanwhile, courtesy of its tally of eight hotels and 1,239 keys.
It’s a similar story on a region-by-region basis, as APAC leads the way overall. There are 42 projects and 8,389 rooms in the works here – greater than the 34 schemes with 4,585 keys being lined up for North America. Europe (six hotels, 1,114 rooms), Latin America (three properties, 525 keys), and the Middle East and Africa (one development, 200 rooms for both) complete our breakdown. 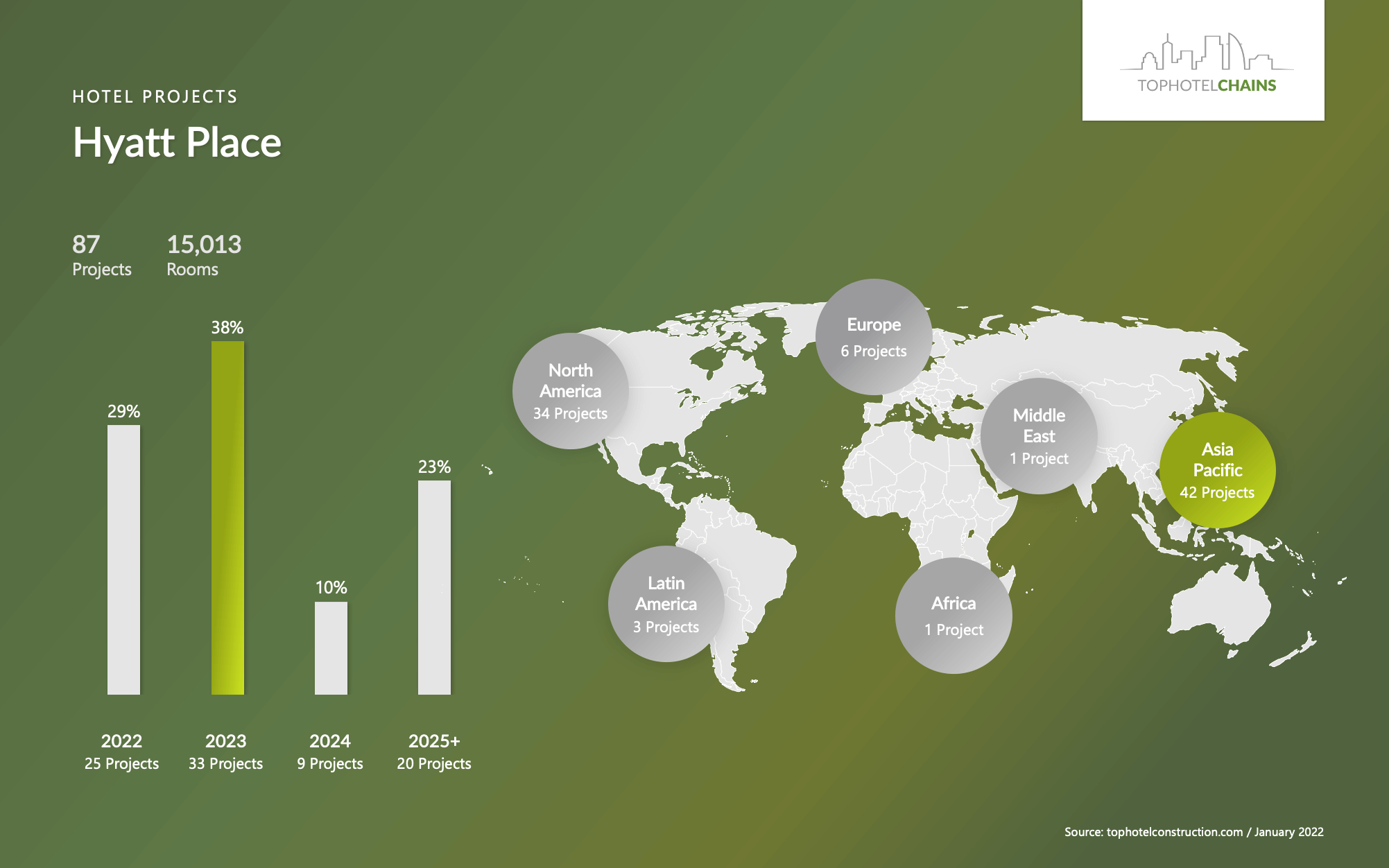 Hyatt Place is a brand that tends to move quickly after securing new sites and this is certainly reflected in the expected completion dates of these projects.
An impressive 25 schemes with 4,627 rooms are due to be ready this year, while an additional 33 developments and 5,664 keys will follow next year. This leaves just nine properties and 1,662 rooms that are aiming to go live in 2024, with the remainder (20 hotels, 3,060 keys) landing in 2025 and beyond.
That’s the big picture then, but to get a more rounded appreciation of Hyatt Place’s development drive, perhaps it might also be helpful to take a closer look at two of the many schemes currently under construction around the world.
First up is Hyatt Place Brisbane South City Square, which is expected to open in Q2 2023. Part of the AU$700 million (US$500.8 million) South City Square mixed-use development, it’ll incorporate 170 rooms, a rooftop pool and bar, a café, a lobby lounge, a 24-hour grab-and-go food market and a fitness centre. The design team behind this ambitious newbuild includes DBI and Woods Bagot.
Another newbuild that’s well worth highlighting is Hyatt Place Georgetown Demerara, which has been earmarked for a plot in Georgetown, the capital of Guyana. Hyatt Place plans to expand its Latin American footprint by opening a contemporary 125-room hotel managed by Aimbridge Hospitality. It’s hoped that the property, which is to be located near the Providence Stadium, will launch in Q4 2024.
Many TOPHOTELNEWS articles draw on exclusive information from the TOPHOTELPROJECTS construction database. This subscription-based product includes details of thousands of hotel projects around the world, along with the key decision-makers behind them. Please note, our data may differ from records held by other organisations. Generally, the database focuses on four- and five-star schemes of significant scale; tracks projects in either the vision, pre-planning, planning, under-construction, pre-opening or newly opened phase; and covers newbuilds, extensions, refurbishments and conversions.
Learn more
Related Articles
Feb 9, 2022
Preferred Hotels & Resorts has bolstered its global leadership team with the addition of Williams, who’ll be responsible for driving the independent hotel brand’s commercial efforts. An industry professional with experience at the likes of Highgate Hotels and…
Feb 3, 2022
Courtyard by Marriott Paris Creteil (imagery: © Courtyard by Marriott) The TOPHOTELPROJECTS construction database shows that Marriott International’s prolific brand has 84 schemes on the go, including dozens in the US and Chinese markets. Courtyard by Marriott has no…
Feb 3, 2022
Accor has appointed Derry to lead its team in the Pacific, succeeding Simon McGrath, who is leaving the French hotel giant to take up a high-profile role in Sydney. A well-known industry professional has been picked to fill one of the most powerful positions in APAC’s…
Jan 31, 2022
James McGinn (left), Howard Hastings (centre) and Edward Carson (right) (imagery: © William Cherry / Press Eye)  The Northern Irish luxury hotel group, whose portfolio includes The Culloden Estate and Spa and Europa Hotel in Belfast, has appointed a new chairman and…
Jan 27, 2022
Hyatt Regency Edinburgh Marina The People’s Republic is providing rich pickings for Hyatt Hotels Corporation’s upper-upscale brand, according to the TOPHOTELPROJECTS construction database. Figures compiled by our in-house research team indicate that Hyatt Regency has…
Jan 27, 2022
Singapore-based hospitality company Banyan Tree Group has debuted the newest concept within its global multi-brand ecosystem on the idyllic Thai island. The Homm brand is up and running with the arrival of the beachfront Homm Bliss Southbeach Patong. A new Banyan Tree…