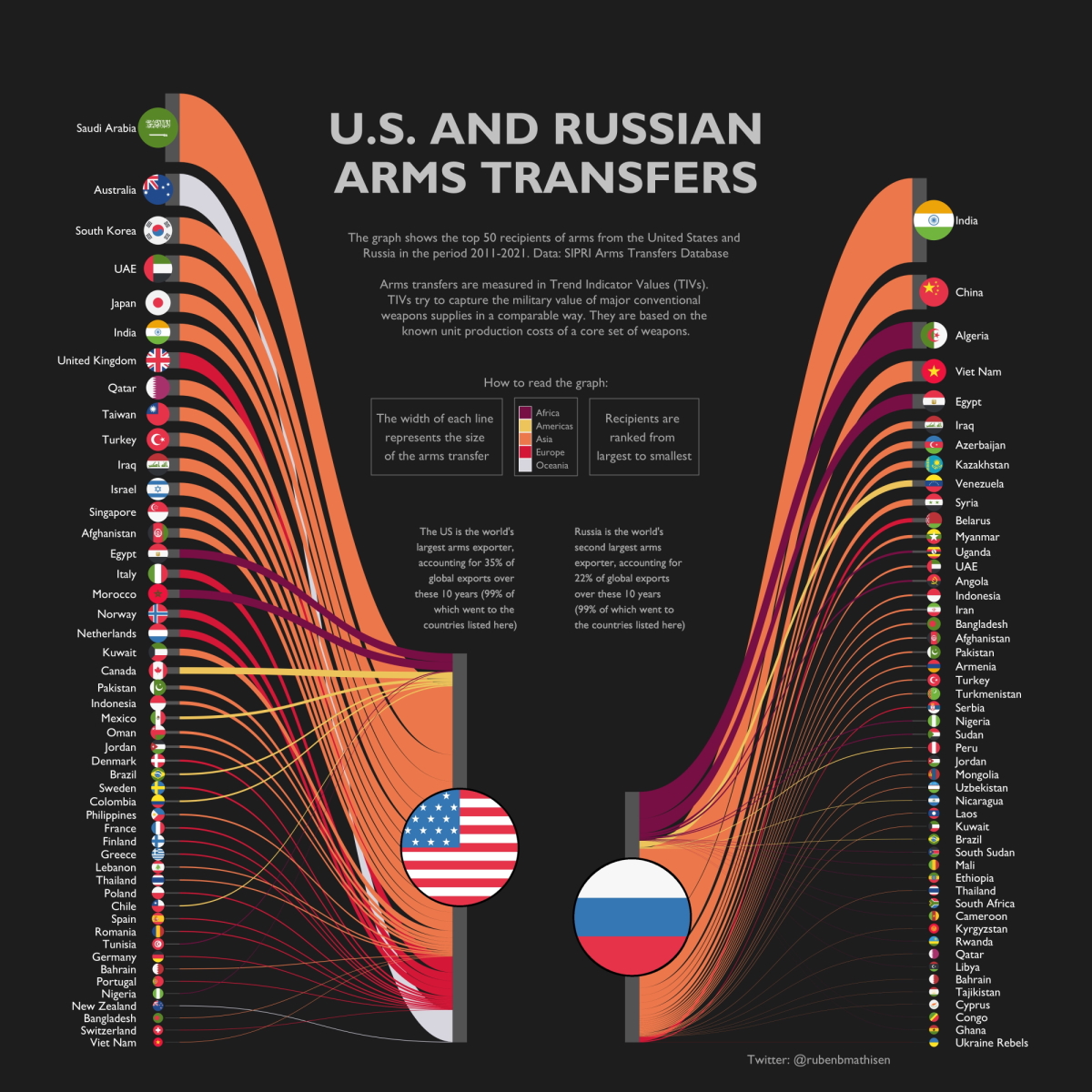 The increase in conflicts worldwide, including in Ukraine and the Middle East, has shifted global focus back onto arms transfers between countries.
For decades, countries proficient in arms manufacturing have supplied weapons to other countries in demand of them. At the helm of these trades are the U.S. and Russia, which have accounted for 57% of all international arms trades in the last 10 years.
So who are the largest importers of arms from these two countries, and what is the military value of these trades?
With the help of data from the Stockholm International Peace Research Institute (SIPRI) arms transfer database, the above infographic by Ruben Berge Mathisen visualizes the top 50 biggest arms recipients by value for both the U.S. and Russia in the last decade.
The military valuation of arms is measured in terms of trend-indicator values (TIV). This valuation reflects the military capability of a particular item rather than its financial value.
Every weapon that falls under the conventional definition of major arms is allotted a TIV. The following are the most common weapons and components to be assigned a TIV.
Instead of focusing on budget, examining TIV makes it easier to measure trends in the flow of arms between particular countries and regions over time, essentially creating a military capability price index.
The United States is the largest exporter of arms globally, responsible for 35% of global exports over the last 10 years to about 130 nations.
Most recently, the biggest market for U.S. arms sales has been in the Middle East, with Saudi Arabia being the most prominent recipient of weapons. Over the last decade, the country has purchased 24% of total U.S. arms exports, with components worth over 18 billion TIVs.
Here is a look at the top 50 recipients of arms from the United States:


The U.S. remains the biggest global exporter of weapons globally, however, sales of military equipment to foreign countries dipped by 21% over the previous fiscal year, dropping from $175 billion in 2020 to $138 billion in 2021.
Russia, the world’s second-largest arms dealer, was responsible for 22% of global arms exports between 2011 and 2021.
In terms of TIVs, India remains the biggest importer of Russian weapons by a wide margin. India’s dependency on Russian-made arms is driven by its fight to quell the military assertiveness of China on one side and its constant skirmishes along the Pakistani border on the other.
But despite the continued support of Russia and its President by the Indian Prime Minister, even in the wake of Russia’s war on Ukraine, some reports have shown that India has been looking elsewhere for arms in the last few years.
Let’s take a look at some of the other biggest importers of Russian arms around the world: